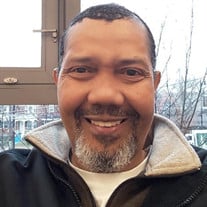 On Saturday, November 21, 2020, Alan L. Banks was called home to be with his Heavenly Father. Alan was born on September 9, 1964 at Washington Hospital Center in Washington, DC to the proud parents of Agnes and the late William Banks. Depending on who you asked, Alan was known by one of two nicknames, “Al” or YT” by his family and friends. Alan, at an early age, accepted Christ and was baptized at Rehobeth Baptist Church in Washington, DC. Al was educated in the DC Public School system and graduated from Bell Multicultural Senior High School, where he played football as a defensive back. After graduation, he pursued higher educational goals and earned an Associate’s degree in Electronic and Electrical Sciences from TESST College. He was a true “Washingtonian” and living in the District was always “home” for him. Over a career span of 35 plus years, he was employed within the private sector as a multi technical engineer in the District of Columbia, Maryland and Virginia regions repairing complex machinery and equipment for various corporations including; DC Lottery, Konica Minolta, Xerox, WMATA and the newly orchestrated DC Streetcar. He was a hard worker and dedicated employee who avoided “missing a day” for he enjoyed his work. These attributes kept him cemented and focused for which caused him to thrive and be successful in his career field. Al met and married Deborah Monts. This holy matrimony of 18 years produced two beautiful daughters, Alnesha and Amber Banks. As children, he loved taking them to the local creek, and playing putt-putt golf. His girls were his pride and joy! Al and his daughters enjoyed sharing music, sports, politics, and ethnic cuisines together. Alan was a kind, proud and gentle soul with a heart of giving and sharing. He always donned a warm smile, accompanied by a kind greeting when entering your presence. His award-winning smile captivated those who loved and adored him. His easy-going demeanor and cool breeze calmness personified his character. In his spare time, he enjoyed watching classic movies of the 1970’s and quoting movie lines, playing cards, visiting historical sites, preparing Oyster stew, traveling, spending time with family, attending concerts, listening to music (R&B, Jazz and Oldies) and watching football games while rooting for his favorite team, the Dallas Cowboys! Alan is survived by his daughters, Alnesha and Amber Banks, his mother Agnes Woody (Edward), his brother Edward III, his friend Deborah (ex-wife), his aunts Gloria, Jewell (David), Paulette and uncle Winston (Jo) and cousins Vontinette, Michele, Nicole, Aretha, Venus, Danielle, Michael and Phillip. He was preceded in death by his father, William Banks, and grandparents Joel and Dorothy Starke. A host of very special cousins, relatives and friends will also cherish his memory. Al will be sorely missed by all who knew and loved him. The Memorial Gathering is open to the public however; at the family's request the Memorial Service will be invite only for only 25 people are allowed in the building at a time. The family thanks you in advanced for your understanding and cooperation.

On Saturday, November 21, 2020, Alan L. Banks was called home to be with his Heavenly Father. Alan was born on September 9, 1964 at Washington Hospital Center in Washington, DC to the proud parents of Agnes and the late William Banks. Depending... View Obituary & Service Information

The family of Alan Lawrence Banks created this Life Tributes page to make it easy to share your memories.

Send flowers to the Banks family.