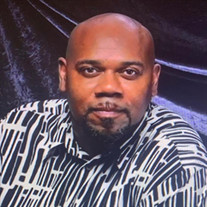 Albert Purrayus Ashe was born on March 24, 1967 in Pittsburgh, Pennsylvania to Evelyn and Benjamin Ashe, Sr. When Albert was younger, his family relocated to the D.C. area where he received his schooling. He graduated from Surrattsville High School in Clinton, Maryland in 1986. From early childhood, Albert was a friendly and outgoing person. He was known by the nickname “Mr. Al,” and enjoyed his role as an older brother, often helping his siblings with their homework. Al’s passions were music and fishing. Anyone who knew him when he was a teenager will remember that Al was an amazing break-dancer, and loved dancing at the skating rink in Clinton with his crew. As he got older, he got more into fishing, and was often trying to get people to join him on his fishing outings. Al was always a kindhearted soul, the type of person who would give you the shirt off of his back. He didn’t hesitate to take care of friends or family when needed, and even served as caretaker for his late grandmother, Louise Ashe. After high school, Al worked at a convalescent home in Clinton where he met his children’s mother, Tina. Shortly after the birth of their oldest son, Lavale, the two moved to Philadelphia, Pennsylvania. While in Philadelphia, Al and Tina expanded their family to include six more children: Le’Kesha, Loren, Tyree, Ameena, David, and Albert Jr. Al was a jack of all trades, known for many jobs including but not limited to: painting, security, flooring, duct cleaning, and minor electrical work. Most recently, he worked at A&D Security Consultants and Frontline Mechanical Services. In his later years, Al enjoyed doing research on ancient civilizations and culture in search of spiritual direction, and often shared his findings with others. Al leaves to cherish his memory: his parents, Evelyn Ashe-Chatlin (Milton), Benjamin Ashe, Sr. (Dawn); his fiancée’, Linda Willis; his children’s mother, Tina Stevenson; six children, Lavale (Regina), Le’Kesha, Loren, Tyree, Ameena, and Albert Jr.; one stepson, Daniel Coles; three brothers, John Griffin (Rosa), Benjamin Ashe, Jr. (Natalie), and Bernard Ashe (Tiffany); three sisters, Adela Hopson, LaShawn Davis, and Brittany Broady; two grandsons, Amir and Amorie; three granddaughters, Drew, Gianna, and Milan; and a host of aunts, uncles, cousins, nieces, nephews, and friends. He was preceded in death by his son, David Stevenson. New Guidelines/ Regulations for attending visitations/serives: - Everyone must be wearing a mask -Only 25 people are allowed in the building at one time. - Social distancing is recommended. Cemetery Regulations: -50 people or less - Masks and social distancing still apply

Albert Purrayus Ashe was born on March 24, 1967 in Pittsburgh, Pennsylvania to Evelyn and Benjamin Ashe, Sr. When Albert was younger, his family relocated to the D.C. area where he received his schooling. He graduated from Surrattsville High... View Obituary & Service Information

The family of Albert P Ashe created this Life Tributes page to make it easy to share your memories.

Send flowers to the Ashe family.