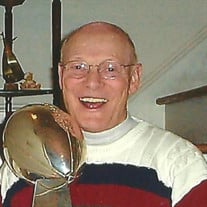 Albert Pometto Simms, Sr. of Upper Marlboro, MD passed on April 28, 2021, just one day shy of his 86th Birthday. Al was born in Washington, DC on April 29, 1935, the son of Elvida Marie Pometto Simms and Robert Hall Simms. Al was born and raised Catholic and was christened and confirmed. Al’s maternal grandparents immigrated to America from Italy, and he was extremely proud of his mother’s Italian heritage. Al grew up in Upper Marlboro and attended St. Mary’s Catholic School through the 8th grade. He learned from an early age the importance of hard work, that a sense of humor can go a long way, and he had the strong desire to make an impact in his community, which led him to become a volunteer firefighter at the age of 16. Al met the love of his life, Doris Watts in 1954. Introduced by his cousin Ann, Al and Dot had their first date on March 5, 1954 and were married on October 10, 1958. They remained devoted to each other for over 6 decades, and they set a sterling example of true love for their 5 children. After graduating from Frederick Sasscer High School in 1953, Al enlisted in the United States Navy. He served from 1954 to 1958, training as an aviation electrician while stationed in Bermuda and Virginia Beach until he was honorably discharged. He later re-enlisted in the United States Navy Reserve, serving from 1979 to 1995, at which time he retired following 20 years of service to his country. After his active service in the Navy ended in 1958, Al worked for United Airlines at National Airport as an Aircraft Electrician. However, firefighting and rescue were never far from his heart. In 1967, Al became one of the first professional firefighters in Prince George’s County. He was a member of the Marlboro VFD Company 20, as well as Forestville VFD Company 23, and spent many of his later years as a Fire Inspector. During his tenure, he created the House On Wheels, a mobile fire prevention and safety unit. Al would travel from school to school and teach children different ways to identify fire hazards inside the home, as well as methods to use to escape safely in the event of a fire. During Al’s lifetime, he rarely sat still. He was always working with his hands. After retiring in 1985, he volunteered his time at several different places. The most notable was the Smithsonian (Paul Garber Facility), where he was part of the restoration team for the Enola Gay, the Boeing B-29 Superfortress bomber known for dropping the first atomic bomb on Hiroshima in 1945 during World War II. He enjoyed running and was a basketball player and championship swimmer while in the Navy. He was extremely independent, and a proud Italian man, and his quiet and steadfast ways will be missed enormously by his family and friends. He leaves behind a world that is better because of his contributions. Beloved husband of Doris Watts Simms; devoted father of David “Chris” (Stacey) Simms of Chesapeake Beach, MD, Donna (Joseph) Atchison of Owings, MD, Patricia “Patti” (Chris) Holtery of Odenton, MD, Paul C. Simms of Upper Marlboro, MD and the late Albert Pometto Simms, Jr.; dearest granddaddy of Carla Simms, Thomas Hale, Heather (Donald) Bronson, Jennafer “Jenna” (Michael) Vermillion, Kristin (Casey) Eide, and Natalie Holtery; loving brother of Elveda (Butch) McKnight of Largo, FL, and the late Robert Simms, Jr. (his identical twin) and Tony Simms; dear great-granddaddy of Chloe Clagg, Tucker Bronson, Michael “MJ” Vermillion, Jr. and great-grandson to be, Camden Eide.

The family of Albert Pometto Simms, Sr. created this Life Tributes page to make it easy to share your memories.