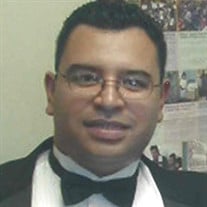 Alex was born in San Salvador, El Salvador on April 16, 1970 and immigrated to the United States with his parents when he was two and half years old. He grew up in the Adams Morgan and Mount Pleasant multicultural neighborhoods. He was a product of the District of Columbia public school system and in May 2012 he obtained a Bachelor of Science in Information Systems Management from the University of Maryland. His desire to serve his country started in high school when he enrolled in the Junior Reserve Officers' Training Corps program. His passion for service then led him to federal civilian service for over 20 years working as a Contract Specialist at the National Institute of Health National Library of Medicine. He is known by his colleagues as a person of integrity, and honesty. He was also regarded as a great trainer by his peers. Alex was a simple man that loved his family and appreciated life to the fullest. He was always willing to help even in death as an organ donor. He always had the courage to fight for what was right even if it was at his loss. Often denying his own needs, to take care of others. Alex’s greatest love was his daughter Gabriela. Alex had a vision and through photography he shared it with the world. Like his father, he shared a passion for vintage cars, motorcycles, the outdoors, music, good company, and food. He was always one for gathering family and friends, and cooking everyone a great meal. He is survived by his daughter, Gabriela Navas, parents: Manuel and Zoila Navas, brother, Ivan Navas, sisters: Mabeline Hall and Sonita Sosa, brother-in-law, Zhabaron Hall, sister-in-law, Tonija Navas, nephews: Leandro Navas, Zachary Hall, Jorge and James Sosa, nieces: Lucaya Navas, Isabela Hall and Jennifer Sosa, and a host of beloved cousins, and friends. He is preceded in death by his paternal grandparents Genaro Rivas and Fidelina Navas, maternal grandparents: Esteban Bonilla and Paula Rivera, Salvador Rivera Sosa, Jesus Carcamo de Rivera; brother-in-law, Jorge Sosa, and cousins: Carlos and Rene Navas.

Alex was born in San Salvador, El Salvador on April 16, 1970 and immigrated to the United States with his parents when he was two and half years old. He grew up in the Adams Morgan and Mount Pleasant multicultural neighborhoods. He was a product... View Obituary & Service Information

The family of Alejandro Navas created this Life Tributes page to make it easy to share your memories.

Send flowers to the Navas family.