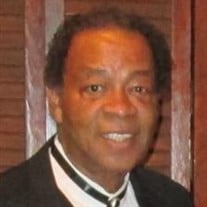 Alfonso (Al) Ellison of Upper Marlboro, MD, passed away on Friday, January 29, 2021. Al was born to John Henry Ellison and Evelyn "Hondu" Ellison on October 28, 1941 in Jamesville, North Carolina. He was the middle child whose family lived in Washington, D.C., but traveled regularly to visit extended family in North Carolina. Al looked forward to spending parts of the summer in North Carolina with his siblings and cousins. As a youngster in Washington, D.C., Al attended William Syphax Elementary School (Southwest D.C.), Randall Junior High (Southwest D.C.), Douglas Junior High (Southeast D.C.), and Anacostia Senior High (Southeast D.C.) before graduating from Eastern Senior High School (Southeast D.C.) in 1960. While at Anacostia, Al was a member of the 1957 Anacostia Senior High School football team who beat Cardoza and Wilson Senior High Schools to win the championship among public high schools before becoming runners-up in the city championship game against St. John's College High School. Al loved playing football but suffered a leg injury in his final year of high school. While in high school, Al also worked as a member of the wait staff at the U.S. Capitol and the Bowling Air Force Officer's Club. In 1964, Al was drafted to the U.S. Army. At the time, while his friends wanted to be stationed overseas to England or Germany, Al wanted to stay closer to home, as in "Ft. Belvoir." Unfortunately, he did not get to remain close to home, but was instead stationed for two years at Aschaffenburg, Germany. He has told the story of how he almost cried when he learned that he would be stationed so far away, and then how he cried at the end of his two years when he learned that he would have to leave Germany to return home. He enjoyed his time in service and loved living in Germany. Upon his return to the states, Al worked at the National Institutes of Health before he began a career as a computer analyst with the federal government, where he received numerous accolades for his computer programming. In fact, his work with computers actually inspired a few of his nephews to go into the computer field. Initially, he worked with the Bureau of Public Roads (now the Department of Transportation) before working with the Department of the Navy at the Navy Yard in Southeast, D.C. Al retired in 1999 from the Department of the Navy after working for 33 years in the federal government. On January 27, 1973, Al married the love of his life, Barbara, in Northwest, Washington, D.C. They moved to Upper Marlboro, Maryland where they have lived for almost fifty years. The two have three children, Trina, Evans, and Nicole, and a host of grandchildren and great-grandchildren. The couple recently celebrated their 48th wedding anniversary. Throughout his life, Al has traveled extensively with his wife and children. Each year, Al and Barbara would take a different Royal Caribbean cruise. For them, the destination did not matter; it was all about the ship! Over the years, these Diamond Club members have traveled on Royal Caribbean to the Caribbean, Mexico, Europe, Canada, and Bermuda. The couple has also made a few cross-country train trips over the years to San Francisco and Los Angeles, while being able to visit family along the way. In addition, each year Al and Barbara made it a point to travel to at least one away game for their beloved Washington Football Team, including the 2016 away game in London, England against the Cincinnati Bengals, where the couple was able to tour London as well as nearby Paris, France. Their last football trip, before the Covid lockdown, was to Miami, where they saw the Washington Football Team beat the Miami Dolphins during the 2019 season. Al was very social and enjoyed meeting people. He and his wife joined Mt. Ennon Baptist Church in Clinton, Maryland in 2011 and became members of the church's Golden Circle Ministry for seniors. Al was also very dedicated to family - making sure to visit his family and his in-laws at least twice per year. To spend his time, Al enjoyed playing pinochle with other seniors at a local community center. He also had other hobbies, including playing Bid Whist, poker, golf, and other gaming activities. While at home, Al enjoyed watching animal documentaries and listening to the O'Jays. During the summer, Al spent his time growing vegetables in his backyard garden, including tomatoes, beans, and peppers. Al is survived by his loving wife Barbara, his three children Trina (Mark), Evans (Kimberly), and Nicole, his grandchildren, Navaisha, Kayla, and Evans Jr., his great-grandchildren, his four siblings, Cleve (Dorothy), Bill (Joanne), Blonnie, and Jerry, and lots of nieces, nephews, cousins, and friends to forever cherish his memory. Live streamed services may be viewed at https://youtu.be/RGPjLY_c9c8 In lieu of flowers, donations can be made to the American Heart Association. The Ellisons

The family of Alfonso Ellison created this Life Tributes page to make it easy to share your memories.

Send flowers to the Ellison family.