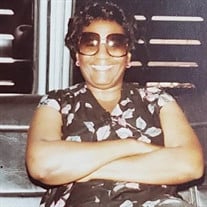 Annie Mae Robertson Taylor Sunrise April 5, 1944 - Sunset August 2, 2020 Date of Service Thursday, August 13, 2020 Viewing 11:00 am - Service 12:00 pm On Sunday, August 2, 2020, Annie “Mae” Robertson Taylor received her wings and went to walk with the angels. Mae was born on April 5, 1944 to the late Otis and Marie Wilson Robertson in Hattiesburg, Mississippi. Mae attended school in Halifax County, VA before relocating to Washington, DC. She had an unwavering faith in God and was the matriarch of her family. She accepted Christ as her Savior at a young age at Pleasant Grove Baptist Church in South Boston, VA and later joined Greater Morning Star Pentecostal Church in Washington, DC. Mae was a devoted wife to Robert “Bobby” Taylor who preceded her in death in 2018. Their love and love story was both enduring and blissful. Mae and Bobby was known for hosting shopping trips, traveling the states and cooking meals that were plentiful. Everyone loved her southern style of cooking. In addition to cooking, some of her other hobbies included creating floral arrangements, maintaining a flower garden and interior home design. Their home was a loving and caring environment where friends and family would gather. Anyone who visited during the holidays was often surprised by the extravagant decorations and abundance of gifts. Christmas was Mae’s and is the family’s most cherished holiday. Mae was a consummate homemaker and one of the most important things in her life was being a dedicated mother to her children. Mae would proudly boast about Tippy, Dude, Bumpsy, her grandchildren and her great-grandson to everyone. She raised her children in a deeply rooted community on “7th St, SE” where her home was a integral part of the neighborhood. She treasured her children and embraced every moment with them. This is where she drew her strength and left her legacy. In her later years, Birchwood Assisted Living Facility became her extended family who cared for her during her final days along with her children. Mae’s sense of humor and giving heart will be missed tremendously by the many lives she touched. Mae leaves to cherish her memory: mother Eva Robertson, loving brother Willie (Inez), sons Lenon (Sheila), Otis (Monica), Darryl (Carolyn) and daughter Christi; nine grandchildren, Ansche’, Aileasia, Khamaree, Brianna, Arianna, Bryce, Courtney, Kassidy, Dallas; one great-grandson, Ashton; three goddaughters, Teedra, Sherita, and Kristen along with a host of other relatives and friends. In addition to her husband, she was preceded in death by daughters Carra and Robyn.

The family of Annie Mae Taylor created this Life Tributes page to make it easy to share your memories.

Send flowers to the Taylor family.