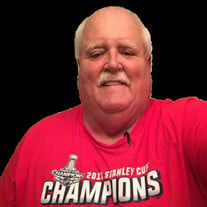 ARNOLD POPE BURR Arnold Pope Burr, 71, passed away on October 10, 2021 at University of Maryland Charles Regional Medical Center from complications leading to sepsis. Pope graduated from the University of Miami in 1972 with a Bachelors degree. Subsequently he worked overseas for several years for an international water loss consulting firm, before returning home to Maryland to care for his mother and complete further studies. He graduated as an Electrical Engineer from the University of Maryland in 1986. During these years he met and then married Ana Maria Leguia, with whom they raised her first daughter, Irene, and later Grace and Melanie in Kensington and Potomac, MD. After the divorce in 2007, Pope moved to Waldorf to be closer to his work and continued at the Naval Surface Warfare Center, Indian Head Division (NSWC IHD). Pope’s cheerful, jovial nature and infectious laughter made him easy to get along with for anyone who met him. Ever a dog lover, Pope shared many good times over the years with his three Bernese Mountain dogs (“Berners”), first Fred, then Dylan and Guinness. Good natured, just like him. Pope worked at NSWC IHD for over 34 years. He started as an Electronics Engineer in the Munitions Countermeasures Department, evaluating specialized equipment for EOD technicians and ended his career as a subject matter expert in radio frequency (RF) systems and technologies that detect buried threats for EOD. Pope traveled to many government sites to evaluate unexploded ordnance (UXO), UXO contractor performance and most recently spent his time building up the RF capability in the anechoic chamber of the EOD Department. He applied his quick mind and engineering background to solving everyday problems, and then some. With colleagues, Pope submitted a technical paper published at the 2020 IEEE International Conference on Computational Electromagnetics. Pope is survived by his devoted wife of 10 years, Noela Diane Ssanya. A memorial gathering will be held on Friday, November 12, 2021 at the Lee Funeral Home, 6633 Old Alexandria Ferry Rd, Clinton, MD 20735 from 1 pm until a memorial service at 3 pm. A reception with refreshments will follow the service at the funeral home. In lieu of flowers, memorial contributions will be made to the Bernese Mountain Dog Club of Watchung Rescue at www.bmdcw.org/index.php/rescue or BMDCW Rescue, 14 Ridgewood Lane, Oley, PA 19547 attn. Angela Evan, Treasurer. Arnold Pope Burr, born October 21, 1949 in Washington, DC, died October 10, 2021 in La Plata, MD. He will be remembered and missed by his wife, children, friends and co-workers.

ARNOLD POPE BURR Arnold Pope Burr, 71, passed away on October 10, 2021 at University of Maryland Charles Regional Medical Center from complications leading to sepsis. Pope graduated from the University of Miami in 1972 with a Bachelors degree.... View Obituary & Service Information

The family of Arnold Pope Burr created this Life Tributes page to make it easy to share your memories.

Send flowers to the Burr family.