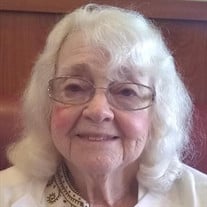 My Loving Mother, Aurelia Doris Riggleman, by Terri Quintos. Mom was born to Richard Lester and Margaret Elizabeth (Jackman) Kidwell on Tuesday, June 28, 1938, at 11:20 p.m., in Washington, D.C., as a beautiful, fair-skinned baby with a thin-fuzzy... View Obituary & Service Information

The family of Aurelia Doris Riggleman created this Life Tributes page to make it easy to share your memories.

Send flowers to the Riggleman family.