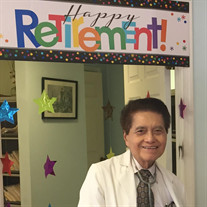 Dr. Ben Pangilinan Binghay passed away peacefully on October 10, 2021 at his home surrounded by his son and daughter. Born on May 18, 1926 in Pinamungajan, Cebu, Philippines, he was the youngest son of Gregorio and Concepcion Binghay. Early in his childhood he decided to become a doctor. With the support and prayers of his family, he completed his medical degree at Southwestern College of Medicine, Cebu City in 1955. Following his residency, he became the Municipal Health Officer in Balamban, Cebu. A foreign exchange residency took him to Perth Amboy, NJ, Wichita Falls, TX, Jacksonville, FL and finally Washington DC. There he met Nery Piedad Noboa, a nurse from Ecuador. They married and celebrated over 52 years of marriage together and had 4 children. Dr. Binghay's career included practicing Emergency Medicine at Eastern Dispensary and Casualty Hospital ( Capitol Hill Hospital) , Cafritz Memorial Hospital ( Greater Southeast Community Hospital), Prince George's General Hospital and Dr.'s Hospital in Maryland. In 1978, the American Board of Family Practice was established and Dr. Binghay was one of the first board certified physicians in this specialty. Dr. Binghay was then recruited by the U.S. Air Force in 1979 and served a tour of duty in the Panama Canal Zone as Chief of Primary Care at Howard AFB and then MacDill AFB in Tampa, Fl. He was honorably discharged as a Lt. Colonel at the end of his tour of duty in 1983. Dr. Binghay returned to the Maryland/Washington DC area and completed a Fellowship in Family Practice to then open his private practice. Dr. Binghay practiced Family Medicine until his retirement in September of 2018 at the age of 92. Many of his patients were families that had gone to him for medical care for generations. These last few years Dr. Binghay enjoyed traveling with his family, spending time with his grandson, watching tennis and football and working in the yard and lawn at his home where he lived with his son and daughter. Dr. Binghay was a devoted Catholic family man and very dedicated to his profession. His greatest satisfaction was to have his family close to him and to have reached the pinnacle of his specialty. He had a true calling to help others, cure their illness and keep them healthy. He was truly blessed with a long and happy life. Dr. Binghay is preceded in death by his wife Nery Piedad, daughter Marianela Concepcion, son Ben Gregory, brothers Guillermo, Moises, Crisostomo, Miguel and sisters Juanita, Rosa and Mercedes. He is survived by daughter Mary Caroline, son Paul Edward, daughter-in-law Susan Marie, grandson Liam Alexander and many nieces and nephews in the Philippines, Canada, the U.S. , Singapore and Australia. Funeral services will be held on Saturday October 23, 2021 Viewing will be at 11 am at the church of St. John the Evangelist 8910 Old Branch Ave Clinton, MD Funeral Mass at 1200 and burial immediately after at Resurrection Cemetery on Woodyard Road Clinton, MD Those wishing to make a memorial contribution in Dr. Binghay's name may do so at the American Stroke Association Foundation at stroke.org.

Dr. Ben Pangilinan Binghay passed away peacefully on October 10, 2021 at his home surrounded by his son and daughter. Born on May 18, 1926 in Pinamungajan, Cebu, Philippines, he was the youngest son of Gregorio and Concepcion Binghay. Early... View Obituary & Service Information

The family of Ben Pangilinan Binghay created this Life Tributes page to make it easy to share your memories.

Send flowers to the Binghay family.