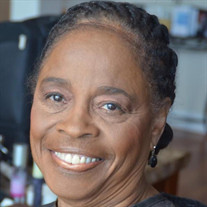 On Friday, January 22, 2021, Bernice Robinson peacefully departed this life in the comfort of her home in Clinton, Maryland. Bernice was preceded in death by her mother Janie English Richardson, eldest sister Mamie Nell Watkins, youngest brother Ricky Richardson, and beloved niece Cheryl Bennett. Bernice was born on July 24, 1941 in Sumter, South Carolina to Janie English Richardson. She was the second child of eight children. She moved to Washington, D.C. as a teenager and graduated from Cardozo High School. In the early 1970’s she ventured out to Northern California with her young daughter, Lisa M. Hook, where she met and married Bobbie L. Robinson. Out of their union they were blessed with their second daughter, Barbara R. Henley. The family relocated to Maryland in the early 1980s, and Clinton was Bernice’s home for the rest of her life. Bernice worked for the Prince George’s County School System as a bus attendant for special needs children from the 1980s until her retirement in June 2018. To Bernice the children weren’t just students; they were her “babies”. She loved her job and lit up like a Christmas tree when she talked about her “babies”. During her breaks, after dropping the children off at school, she would enjoy a speed walk around the grounds, encouraging those around her to come along for much needed exercise. Most didn’t take her up on her offer, because she walked too fast for too long. Bernice’s other passion was playing Bingo. She was a Bingo pro as she could play 50+ cards at one time with no problem! Bernice was a member of Mt. Ennon Baptist Church in Clinton, Maryland. Bernice leaves to cherish her memories: two devoted daughters, Lisa M. Hook and Barbara R. Henley (Maurice); loving grandsons, Khalani, Dylan, and Cameron; sisters Johnnie Mae Bennett, Callinda Johnson, and Diane Fowler (James); two brothers, Samuel Richardson (Wanda) and James Richardson (JoAnne); one special cousin, Laura Bell English; best friends, Jannie Mae Anderson “Sis” and Barbara Jenkins (Richard); a host of nieces, nephews, and cousins from the English family and beloved friends.

The family of Bernice Robinson created this Life Tributes page to make it easy to share your memories.

Send flowers to the Robinson family.