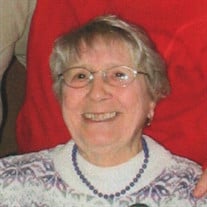 Betty Ewen, 87, of Chesapeake Beach, MD passed away on September 17, 2020. Born on January 21, 1933 in Chelmsford, England, she was the daughter of the late Frederick Percy Pennock and Clara Eva (Bowsell) Pennock. Betty married her husband, Wendell Paul Ewen, on September 12, 1953 at St. Nicholas Church in Witham, England. They celebrated 49 years of marriage before his passing in April of 2003. Betty became a military wife and moved with her family to numerous Air Force bases until moving to Maryland after Paul’s retirement. She enjoyed many years working as a sales associate at J. C. Penney and later at the U. S. Naval Academy Midshipmen Store before her own retirement. Betty is survived by her children, Tim Ewen (Joyce) of Prince Frederick and Amanda Ewen of Chesapeake Beach, her granddaughter, Amy Ewen of Alberta, Canada, and numerous nieces and nephews. In addition to her husband and parents, she was preceded in death by her siblings Eva Joan Turp, John Pennock, Albert Pennock, Douglas Pennock, Donald Pennock, and Margaret May. The family will receive friends at Lee Funeral Home Calvert, 8200 Jennifer Lane, Owings, MD 20736 on Sunday, October 4th, 2020 from 2:00 to 4:00 p.m. A funeral service will be held on Monday, October 5th, 2020 at 11:30 a.m. in the funeral home chapel. Interment will be private. In lieu of flowers, the family requests that contributions be made in Betty’s memory to Calvert Hospice, P. O. Box 838, Prince Frederick, MD 20678 (calverthospice.org). NEW GUIDELINES FOR ATTENDING VISITATION / SERVICES. - 50 to 75 people max at any given time in Funeral Home. - Limit visitation to 15 minutes in visitation room to allow for others to express their condolences. - Funeral Services in Chapel limited to 70 people with four (4) people per pew. - Masks and six-foot social distancing still applies.

Betty Ewen, 87, of Chesapeake Beach, MD passed away on September 17, 2020. Born on January 21, 1933 in Chelmsford, England, she was the daughter of the late Frederick Percy Pennock and Clara Eva (Bowsell) Pennock. Betty married her husband,... View Obituary & Service Information

The family of Betty Ewen created this Life Tributes page to make it easy to share your memories.

Betty Ewen, 87, of Chesapeake Beach, MD passed away on September...

Send flowers to the Ewen family.