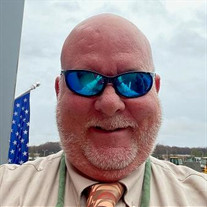 Death leaves behind a heartache no one can heal, but love leaves behind a memory that no one can steal. William Darrel Jodoin (“Bill” or back in the day “Wild Bill”) passed away early Tuesday morning on 7 October, he was only 58 years old. How can you write an obituary on a man that was larger than life in so many ways? I do not know, but I am going to give it a try. I know I will miss things, so please add them at will in the comments/notes. Bill was the fourth out of five children, His mom is Gloria and his father was Paul. He has two surviving brothers, Dick and Bob. Bill met his wife Sherry in 1986, married in 1992, and were married up until Sherry passed away in January 2016. Bill & Sherry had one beautiful daughters Ashley and he raised and loved Melissa like his own daughter. Ashley is married to Joseph Bechtel and they have two beautiful children, Joseph Jr (JJ) is three, and Elizabeth is one. Melissa is engaged to Paul and has two beautiful daughters, Kaitlynn is 18, and Amber 13. Bill had many loves, but nothing topped his love for his four grandchildren. He loved them kids more than anything in the world and I would love to see the pride in his eyes when he talked about them and shared pictures. His goal in the next few years was to move closer to them so he could be a bigger part of their lives. Bill and I were in the process of looking for land in West Virginia for hunting and a place where his grandkids could come to shoot guns, fish, and ride four wheelers. Among some of his other loves; Bill was an avid hunter and fisherman, which he proudly displayed a few prime bucks on his entertainment room walls. I would show him pictures of the big deer from my trail-cams, and wouldn’t you know it, before I had a chance to hunt, I would be helping him drag one of them out of the woods. I would shake my head swearing I would not tell him anymore. As a teenager, Bill climbed radio towers changing out the bulbs. One tower in Maine was taller than the Empire State Building (talk about having a pair). After doing that for a few years this, Bill joined the Army and took a lot of pride in serving our Country. He was an Army Ranger serving in an infantry Division at Fort Hood, Texas in the early 1980s. After leaving the Army, Bill moved on to a more lucrative career in the construction trades. He was an amazing builder, and could learn things almost immediately – a natural in carpentry. This was one reason why he was an amazing superintendent. He could pick things up fast and would know what had to be done when and made sure it happened. Bill loved his country music, four letter words, and his four wheel drives. He had true southern values, a self-sufficient country boy with the country boy can survive mentality. Everyone that encountered Bill knew where he stood. He did not mix words. Bill was world-renowned for his lack of patience, not holding backing his opinion, and had a knack for telling it like it is. He always told you the truth even if it wasn’t what you wanted to hear. With that said, Bill was genuine to a fault. He had a heart of a lion and you would know that if you crossed him or his family. But Bill was also the most generous person you would meet with his time, money, and food. If you left his house hungry, it was your own fault. Bill was the funniest person I knew. He could engage a group of people and have them rolling on the floor in laughter like no other. Watching movies with Bill was an experience you would never forget. He had a unique talent of knowing every word and saying it at the exact time as the movie turning a Clint Eastwood western into a Blazing Saddles comedy. It is men like Bill that build and keep this country great, never backing down regardless if the odds were against him. Even as a kid, he was a great fighter and only the unwise would challenge him. As kids, Bill didn’t think I was tough enough, so he would tell other kids I said things about them and as soon as we got off the bus after school, the next thing I knew I was getting beat up, but no worries, Bill would be right there coaching me. I hated him for it then, but thanked him every day after when I joined the Army. Bill is a strong, proud, and good man. He will be missed so much. We as family, friends, and a Nation have lost an amazing man and true patriot. Everyone who knew Bill is asked to remember him in their own way, by raising a glass of their favorite drink, or for me, praying to God thanking Him for allowing me to have such a great brother, best friend, role model, and hero. Bill will be cremated and his ashes will be mixed with his wife Sherry, now they will be together again. Memorial Service will be held at Lee Funeral Home Calvert, Owings, MD 20736 on Tuesday, 13 October. Visitation will be from 11:00 am to 1:00 pm, followed by a Celebration of Life Service from 1:00 to 2:00 pm. In lieu of flowers, please send all donations to the National Rifle Association (NRA), because he believed as does his family in our Second Amendment Rights for a strong America today and in the future. Bill, Whenever I am missing you, I also will remember how fortunate I was that you were in my life. I would not trade those moments for the world. We love you.

Death leaves behind a heartache no one can heal, but love leaves behind a memory that no one can steal. William Darrel Jodoin (&#8220;Bill&#8221; or back in the day &#8220;Wild Bill&#8221;) passed away early Tuesday morning on 7 October, he... View Obituary & Service Information

The family of “Bill” William Jodoin created this Life Tributes page to make it easy to share your memories.

Death leaves behind a heartache no one can heal, but love leaves...

Send flowers to the Jodoin family.