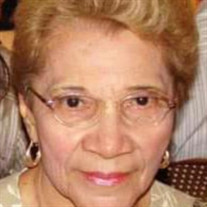 Blanca Rosa Soto Román de Arocho Hernández (a.k.a. Blanca Arocho Hernandez), age 91, of Prince Frederick, MD, the matriarch of the Arocho Soto-Roman family, quietly passed away on Wednesday, February 24, 2021, under the care of her loving children, at the home of her son. She was born in the town of Hatillo in the U.S. island of Puerto Rico. She had lived in Calvert County, MD for the last 22 years. Prior to that she lived in Hightstown, NJ for over 40 years. Prior to her retirement she loved to work as a pre-school teacher and with the elderly at a nursing home. Blanca adored spending time with her family of three sons, nine grandchildren and fourteen great-grandchildren. She was a loving and devoted daughter, wife, mother, grandmother, great-grandmother, sister, aunt, cousin, friend and mentor to many. Daughter of the late Juan E. Soto and Rosa Roman Fuentes de Soto. Blanca was preceded in death by her husband Antonio Arocho Hernandez and seven siblings. She is survived by her sisters Gloria Soto Roman Vda Rodríguez and Josefa Soto Roman de Camacho. Blanca is also survived by her sons and daughters-in-law, Antonio “Tony” Arocho, Esq. and Mary Ann Hernandez de Arocho, Raphael Arocho and Karen, and Nelson Arocho and Annette; her beloved grandchildren, Alyssa Huff, Ashley Kane, Devin Arocho, Antonio Arocho III, Emilio Arocho, María Arocho, Amalia Arocho, Benjamin Arocho, and Margaret Arocho; her beloved great-grandchildren Christian, Penelope, Carmelo, Canaan, Marissa, Karter, Mila, Basil, Brycen, Baylen, Layla, Scarlett, Laureano, and Xiomara. Blanca is survived as well by many nieces, nephews, cousins and other family and friends. There are too many words and not enough paper to adequately express the joy and wisdom that she gave to everyone she met. Her steadfast faith and hope was a driving force in how she loved her family and lived her life. Blanca’s glass was never half full, it overflowed! Where ever she went she brought her ready kindness and love. She will be missed by all who had the privilege of knowing her. She was a devout communicant at St. John Vianney Roman Catholic Church. She will be remembered as a very loving, kind and independent woman and will be loved and missed by her family and friends. Private services will be held at a future date.

The family of Blanca Arocho Hernandez created this Life Tributes page to make it easy to share your memories.

Send flowers to the Hernandez family.