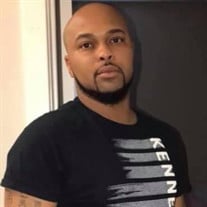 On Friday, April 2, 2021 Bryant Joseph Hines was called home unexpectedly. His time here on earth was at an end and his residency at his forever home began. Bryant Joseph Hines was born on Saturday, June 28, 1984 in Washington, DC. He is the son of Queen Hines and LB Phillips. He was predominantly raised in the DMV area; spending a few years in Halifax North Carolina. In Maryland he attended Lord Baltimore Middle School and Graduated from Potomac High School Class of 2003. He furthered his education at Ohio State University but was side tracked by his love of music. At a young age you could tell he was destined to be an anomaly. His need to follow the beat of his own drum regardless of whatever the consequences was proven through his love of music, gift of gab and smooth talking. He was the proud father of his one and only child Branden Hines and was able to grow and learn with him throughout life which is a blessing. He had a passion for music and his all time favorite artist was Monica. If you knew him you knew he loved him some her. He was a great friend. If you had a problem he would do everything he could to help you solve it. He always checked up on you no matter what he was going through in life. He loved and he loved hard regardless of what relationship you had with him. He was and is still a very loving person. He touched everyone he has encountered in a special way. His spirit was just inviting something you could not pull away from. Bryant leaves to cherish his memory: his parents; Queen Hines, LB Phillips; his son Branden Hines; his grandchildren; Winter Hines, Branden Jr, Isiah Hines; 4 sisters: Shanita Landon (Donnie), Cynthia Escudero (Alfredo), Maria Richardson, Taria Robinson (Sidney); 1 brother: Phillip Humphries; 2 aunts: Francis Hines, Clara Pierce; his sons mother Jacquelyn Johnson (Julianna); and a host of aunts, uncles, cousins, nieces, nephews and friends. He was preceded in death by his sister, Lashonda Yvette Humphries, his aunt, Gladys Hines and his grandmother, Josephine Hines. Due to Covid restrictions have been put into place for everyone's safety: - Everyone must wear a face mask - 100 people are allowed into the building at one time for the viewing - For the funeral service the number of people will be limited

The family of Bryant Joseph Hines created this Life Tributes page to make it easy to share your memories.

Send flowers to the Hines family.