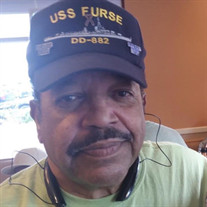 Carl A. Miller Sr. (Skip), age78, of Fort Washington, MD passed away peacefully on Wednesday, September 9, 2020 at home. Carl was born October 23, 1941 in Washington, DC. to Carl C. and Mary Alice Miller. He joined First Baptist Church of Deanwood as a child. He was educated in the Washington D.C. public school system. After graduation from Phelps High School, he enlisted in the U.S. Navy where he served four years on the USS FURSE. In 1962, he married the love of his life, Janet Richardson. From that union, they had four children; Carl Jr., Derrick, Charisse (Reese), and Terrence. After an honorable discharge from the navy, he worked as a truck driver for Henry B. Gilpin. Carl then joined the Metropolitan Police Department in 1970, a career that lasted 30 years. During his tenure with the police department, he was the helicopter AM/PM traffic reporter for the radio station WMAL. During his time with the police, he was featured in a D.C. seatbelt law campaign “Buckle Up”. He also worked as a coach bus driver for many years until his death. He was a hard worker and really enjoyed being a police officer. Carl was known as ‘Skip’, ’Skippy’, ‘Boogie’ and ‘Pop Pop’ to family and friends. He loved his family. He was always excited to spend as much time with his grandchildren as possible and had a unique nickname for each one of them. He made a buddy wherever he went, had a great sense of humor, and was always making jokes. He also loved to drive. He could take a 5-minute trip and turn it into an hour-long road adventure just so he could drive longer. He loved taking pictures, watching NASCAR and the Washington Redskins. His favorite food was a cheeseburger with bacon and extra, extra, extra pickles and he would count the pickles to make sure his order was right. But, let’s never forget his love of spam. Carl is survived by his wife of 58 years Janet Miller; two sons; Carl A. (Lisa) Miller, Jr. and Derrick(Sarah)Miller; one daughter: Charisse (Phillip) Marsh,; six grandchildren: Carl (Kelsie), Ryan, Dawn, Cheyenne, Lenae and Xavier; two great grandchildren; Daniel and Mila; one brother: Larry Miller, Sr. one niece; Yolanda Graves, one nephew; Larry Miller, Jr.; and several adopted daughter’s; Dona’, Bridget, GiGi, Sabrina, Sherri, Michelle, Ebony, and a host of family and close friends. Carl was preceded in death by his parents and his youngest son, Terrence Miller.

The family of Carl Aubrey Miller Sr. created this Life Tributes page to make it easy to share your memories.

Send flowers to the Miller family.