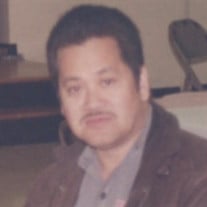 Catalino “Bhoy” H. Cabotaje Jr. Catalino H. Cabotaje, Jr. age 67, was born on August 30, 1953 in Kabacan Cotabato Philippines, to the late Catalino G. Cabotaje and Juanita H. Cabotaje. He was the 4th oldest out of 10 children. Among his favorite past times were dominating in the card game of Pusoy, playing Mahjong, watching his favorite shows The Filipino channel, and when the mood strikes, singing with all his heart’s desire. His favorite songs were “Never, never, never” by Shirley Bassey and “I can’t say Goodbye to you” by Helen Reddy. Catalino Jr., affectionately nicknamed “Bhoy” was a devoted husband of 38 years to Blesh Pascual Cabotaje. He was-loving, caring, humble, and free spirited. Catalino Jr. always thought of many ways to take care of his family. For his wife, Blesh to ensure she is well taken care of as she cared for him through sickness and health and for his son, United States Marine Master Gunnery Sergeant (sel), Christer Jayson Cabotaje. As a father, Catalino Jr. was everything in between, from a stern to jovial mentor but always compassionate. He would always say in Ilocano, “Enjoy every moment to what life has to offer.” He taught many invaluable lessons in life, including, “happiness is beautiful.” He loved his sister and brother in-laws, as well as his families in the Philippines, especially their kids who he treated as his own. They joyously loved and respected him to a point that he was called “Daddy Bhoy”. Catalino Jr. continuously fought his many health struggles for over 15 years. He overcame kidney failure and endured many health complications on his way to recovery. Catalino Jr. was admirable for his strength and determination to fight against cancer and knowing the end result. In his last moments, Catalino Jr. continued to think of his family. As he wished for his families, especially his brothers and sisters to have a loving, compassionate relationship with one another. He transitioned to heaven peacefully on February 4th 2021, in Georgetown University Hospital with his wife, Blesh and his only son, Christer AKA Jayson by his side. Due to Covid-19 pandemic, his brothers, sisters, nieces, nephews, and family from the Philippines were able to be with him on his last day via video forum as he succumbed to stage 4 lymphoma cancer. A special quote from one of Catalino Jr.’s favorite song, “I can’t say goodbye to you, no matter how I try, you’re such a part of me.” Catalino Jr is survived by his wife-Blesh, son-Jayson and Daughter in-law Doreen, his brothers and sisters: Rolando, Eduardo, Wilhelmina, Minda, Darwin, Nancy, Jerry, Homer, and Cheryl. The family would like to thank, Georgetown University Hospital for their phenomenal treatment and very supportive resources.

The family of Catalino Hidalgo Cabotaje Jr. created this Life Tributes page to make it easy to share your memories.

Send flowers to the Cabotaje family.