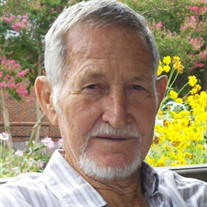 Charles Leo Walthall died peacefully at his home on Thursday, November 4, 2021. Charlie was born in Suitland, Maryland on August 23, 1933. He was preceded in death by his parents, Burton and Bessie Walthall; three brothers, Ed, Billy, and Walter; and a sister, Jean Daniel. Charlie is survived by a sister, Betty King, and his loving nieces and nephews: Cindy King-Lucas, Steve Walthall, Darlene Wahler, Bert Daniel, and Debbie Madden. Charlie served in the U.S. Navy from 1950 to 1954. He was a gunner’s mate on the aircraft carrier, the USS Princeton. After his discharge from the U.S. Navy, Charlie returned home and began a career in carpentry in which he worked for over 50 years. He was an expert carpenter, and there was nothing that Charlie could not make. Charlie was blessed to share 35 years with the love of his life, Betty Orgel, until Betty’s passing in 2012. They were dedicated to each other and had a wonderful life together. Charlie loved his family. Family holidays were always his favorite times because he loved to eat. Uncle Charlie was near and dear to the hearts of all his nieces and nephews, and he smiled ear-to-ear when he was with his family. Charlie’s passions included fishing, going to the horse races, and gardening. He loved spending time with the boys on the bay fishing for rock fish at Point Look Out. Charlie enjoyed going to the races and spending time with his brother-in-law, the late Hampton King. Charlie was never a big winner, but that was not his motivation. Charlie enjoyed tending his garden, and he would work out in the yard every free moment. Charlie had many friends over the years; and he never said, “no,” if anyone ever needed help. A viewing will be at Lee Funeral Home at 6633 Old Alexandria Ferry Rd. Clinton, MD on November 11, 2021, at 10:00 a.m., followed by a service at 11:00 a.m. officiated by Reverend David Fields, Charlie’s neighbor for over 30 years. The interment will follow at Cedar Hill Cemetery, Hillcrest Heights, MD.

Charles Leo Walthall died peacefully at his home on Thursday, November 4, 2021. Charlie was born in Suitland, Maryland on August 23, 1933. He was preceded in death by his parents, Burton and Bessie Walthall; three brothers, Ed, Billy, and Walter;... View Obituary & Service Information

The family of Charles Leo Walthall created this Life Tributes page to make it easy to share your memories.

Charles Leo Walthall died peacefully at his home on Thursday,...

Send flowers to the Walthall family.