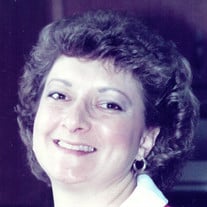 Christine Marie Allen died in her home on August 8, 2021. Chris was born on November 12, 1950 at Bolling AFB in Washington, DC to the late Merrin James & June Elizabeth Gramsky. She is survived by her children Robert Merrin Stillwell (Stephanie) of Annapolis, MD, Christina Marie George (Preston) of Mineral, VA, and Kaitlin Marie Allen of Waldorf, MD, 5 grandchildren Brooke Stillwell, Haley Swanson (James), Mason Stillwell, Preston George IV, Samuel George, 1 great grandchild Maverick Meyer, as well as 4 siblings Susan Hudgins (Randall), Anthony Gramsky, Cecelia Gramsky, Teresa Duley (John) Chris graduated from Crossland High School in Temple Hills, MD and went on to retire from the United Food and Commercial Workers International Union (UFCW) after 30 years of service. Christine was hired May 10, 1982 to work in the Membership Department as an Audit Clerk, she then moved into the General Office Clerk II position. She was promoted to General Office Clerk III, then became a Supervisor and her last promotion before retiring she became Assistant to the Director. Christine was known for the love of her family and for animals. Early in life she worked side by side with her father running the family dry cleaners (Carousel Cleaners) located in Oxon Hill, MD. The death of her father in 1970, left her to run the cleaners with the help of her siblings and mom. She moved back home to her mom’s, with her family in tow, to be closer and help with the younger ones that were still home. She and her family moved to Brandywine MD in 1976 where she had a small farm for her horses, dogs, cats, and birds. In 1988 Christine and family moved to Pomfret, MD were they continued to enjoy the country living. She decided in 1993 it was time to downsize and moved to Waldorf it was here she lived out her life Christine loved to dance and listing to Motown, watching the funny cars at Budd’s Creek, and taking the kids to the Drive-In / movies. Christine was called home after 9 years of fighting Lung Cancer and will be missed by many. In lieu of flowers, the family asks that donations may be made to the American Lung Association or your local animal shelter.

Christine Marie Allen died in her home on August 8, 2021. Chris was born on November 12, 1950 at Bolling AFB in Washington, DC to the late Merrin James & June Elizabeth Gramsky. She is survived by her children Robert Merrin Stillwell (Stephanie)... View Obituary & Service Information

The family of Christine Marie Allen created this Life Tributes page to make it easy to share your memories.