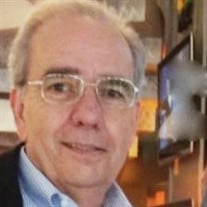 Danford “Dan” Lee Hemp of Conway, SC, formerly of Calvert County, passed away suddenly on Monday, September 28, 2020, at the age of 75. Dan was born in Staunton, VA in 1945 to Anna Britt, but was raised by Sally Dodson. Never knowing his birth father he was extremely close to his children. Dan graduated from Oxon Hill High School and later became a buyer in the grocery business, spending the last years of his career working for Magruders Grocery Stores. He retired in the early 2000’s and spent much of his time helping family. In 2015 he moved to Conway, SC to enjoy a warmer climate. He enjoyed taking care of his yard and new home. He met many new friends and reconnected with old ones. Dan never met a stranger and was always available to whoever needed him. Dan loved his family and they were the center of his world. He is survived by his daughter, Deana and her husband Robby and son, Daniel and his wife Toni. He also leaves behind four granddaughters, Sherry Parker, LeAnn Kennedy, Abby and Elle Hemp and great-grandson Grayson Parker. Dan wasn’t just a father, he was a best friend, a confident and a gentle soul. It made no difference if you were a blood relative or someone he just met, you were a part of his life and made a difference to him. A visitation will be held at Lee Funeral Home Calvert, 8200 Jennifer Lane, Owings, MD 20736 on Saturday, October 3rd from 10 am until start of Funeral Services at 11 am. Burial will follow at Southern Memorial Gardens, 10155 Ward Road, Dunkirk, MD 20754. To view the service on Facebook please join this group. https://www.facebook.com/groups/1029664747447606/?ref=share NEW GUIDELINES FOR ATTENDING VISITATION / SERVICES. - 50 to 75 people max at any given time in Funeral Home. - Limit visitation to 15 minutes in visitation room to allow for others to express their condolences. - Funeral Services in Chapel limited to 70 people with four (4) people per pew. - Masks and six foot social distancing still applies.

The family of Danford "Dan" Lee Hemp created this Life Tributes page to make it easy to share your memories.

Send flowers to the Hemp family.