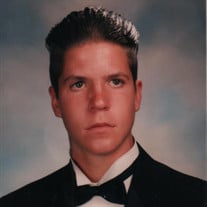 Those who knew Danny, even just a little, lost a shining light in their lives. It is with the deepest sorrow, that we announce that Daniel Andrew Jarboe, II, “Danny” our most beloved son, brother, uncle and friend, died suddenly on September 4, 2020. Danny was precocious and rambunctious as a child, but grew to one day be a man of all trades. Skilled as an electrician, Danny grew up and worked mostly in Calvert county. He graduated from Northern High School in Owings, MD, Class of 1993. Danny had an uncommon skill on the water. He worked with many a charter fishing boat, always being in the Captain’s corner. Danny was mechanical and could fix anything. Whatever he did in this lifetime, he left his mark on his work. Lately it was the pride that he had in manicuring his Dad’s lawn. It suffices to say that Danny was the kind of man who showed up for his friends and did it unconditionally. He loved the Boat House in Deale, MD. He would do anything that was needed and this reflected his character and personality. Danny was a charmer; he never missed a party, family get-together, or just a conversation. His family and friends will miss his generous, fearless and bold personality. One thing for sure; he was well loved in his community. We hope that he is relaxing in the sun, playing a round of golf, still searching for that hole in one. Most cherished son of his Father, Daniel Andrew Jarboe, “Danny” of Owings, MD, his mother Judith Branzell Granados and her husband Dino Granados of Owings, MD; his dearest brother of David Jarboe (Christi) of Pope’s Creek, MD, Dino Granados, Jr. (Tomme) of Brooms Island, MD and Thomas “TJ” Granados (Sandra) of Lusby, MD; and most loving uncle of Haley Jarboe, David Jarboe, II, Anthony Granados, Julia Granados and Sophia Granados. Also loved by many, many friends. The family will receive friends at Lee Funeral Home Calvert 8200 Jennifer Lane Owings, MD 20736 on Tuesday, September 15, 2020 from 2:00 PM to 4:00 PM and 6:00 PM to 8:00 PM. A celebration of his life will be held at The Boat House 604 Cabana Blvd. Deale, MD 20751 on Thursday, September 17, 2020 from 4:00 PM to 8:00 PM. In lieu of flowers, contributions in memory of Danny may be directed to: https://www.gofundme.com/f/daniel-jarboe NEW GUIDELINES FOR ATTENDING VISITATION / SERVICES. - 50 to 75 people max at any given time in Funeral Home. - Limit visitation to 15 minutes in visitation room to allow for others to express their condolences. - Funeral Services in Chapel limited to 70 people with four (4) people per pew. - Masks and six foot social distancing still applies.

Those who knew Danny, even just a little, lost a shining light in their lives. It is with the deepest sorrow, that we announce that Daniel Andrew Jarboe, II, &#8220;Danny&#8221; our most beloved son, brother, uncle and friend, died suddenly... View Obituary & Service Information

The family of Daniel Andrew Jarboe, II created this Life Tributes page to make it easy to share your memories.

Those who knew Danny, even just a little, lost a shining light...