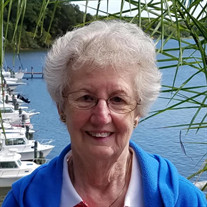 Dawn Gregory, 87, passed away on Feb 16, 2021 at Carroll Lutheran Village, Westminster, MD of natural causes. Born in New Rochelle, NY, she was the youngest of three children to Phyllis Ruffel and Alfred Marriott. Dawn led an adventurous life as a military wife to a career U.S. Army Air Force NCO, Richard Gregory Sr. Flying alone from New York in 1951, she wed Richard in the Territory of Hawaii where he was already stationed. Dawn lived throughout the U.S., Germany, and North Africa before settling down in the D.C. Area. Together, they had three children and were married nearly sixty-six years. Dawn’s tireless devotion went beyond her immediate family. Her home was where the neighborhood kids liked coming to. After raising her children, Dawn had a professional career at Woodward and Lothrop. In her retirement years, Dawn enjoyed having dinners with her friends, playing bingo, and practicing yoga classes. Dawn is pre-deceased by her husband Richard, son Michael, and two brothers LeRoy Marriott and Robert Mathews. She is survived by her son Rick, daughter Robin, five grandchildren, seven great-grandchildren, and one great-great grandchild. Her interment will be at Cheltenham Veterans Cemetery, Cheltenham, MD. A private service will be held for family only. The family thanks the nurses and staff of Carroll Lutheran Village, Carroll Hospice, Right at Home, and Carroll Hospital for their compassionate care of Dawn. In lieu of flowers, donations in memory of Dawn Gregory may be made to: Carroll Hospice 292 Stoner Avenue Westminster, MD 21157 CarrollHospice.org

The family of Dawn Gregory created this Life Tributes page to make it easy to share your memories.

Send flowers to the Gregory family.