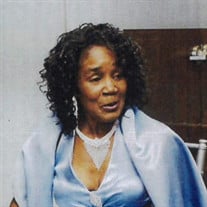 Delarise Glover passed away on July 3, 2021, at age 78 after a courageous battle with cancer, surrounded by loved ones. Delarise “Lois” Glover was born on February 27, 1943 in Mobile, Alabama to the late Clarena and Jessie Hawthorne. At age 2, Lois and her family relocated to New York City. There she attended school and graduated from Andrew Jackson High school in Queens, New York. Upon graduating from high school, Lois was employed by the New York Telephone Company. Shortly thereafter, she commenced a career in public service that spanned over thirty-five years with the Veterans Administration, Social Security Administration, and the Internal Revenue Service, retiring in 1997. Lois had a great appreciation for fashion and style, whenever she walked into a room, she was the best dressed. Not only was she the best dressed, when she took the stage, Lois was the best singer. She rose from being a teenager singing in the “All City Choir” in New York City to performing at Carnegie Hall, Apollo Theater and other noted private galas. Lois loved spending time in the kitchen cooking delicious meals for her family. She enjoyed travelling the world with her companion. Lois loved and adored her grandson “Andy Pooh” immensely. She was proud of her family and leaves behind nothing but beautiful memories. She is survived by her daughter Andrea Dyson and Grandson Andrew Andrews; Siblings Yvonne Lee, Gwendolyn Bates and Christopher Hawthorne; Sister-in-Laws Elouise Glover and Geraldine Smith; and longtime companion Robert Wolfe, as well as many nieces, nephews, cousins and friends to include special friend Barbara Ann. Also predeceased by Husband; Parents Clarena and Jessie Hawthorne; Siblings Helen Johnson, Mary Hawthorne, Jessie Hawthorne Jr., Larry Hawthorne, David Hawthorne and Anthony Hawthorne. The Lord is my light and my salvation: whom shall I fear? The Lord is the strength of my life; of whom shall I be afraid? Psalm.27:1

Delarise Glover passed away on July 3, 2021, at age 78 after a courageous battle with cancer, surrounded by loved ones. Delarise &#8220;Lois&#8221; Glover was born on February 27, 1943 in Mobile, Alabama to the late Clarena and Jessie Hawthorne.... View Obituary & Service Information

The family of Delarise Glover created this Life Tributes page to make it easy to share your memories.

Send flowers to the Glover family.