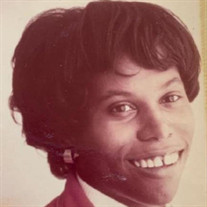 Diane C. Taylor, known affectionately as "Bunnie" was born on May 30, 1946 to James and Geraldine M. Taylor. The eldest of nine children, she was the caregiver of her younger siblings, cousins, aunts, etc. Baptized at the Church of the Incarnation, Bunnie was a practicing Catholic and believed in her Lord and Savior Jesus Christ. Her bond with her mother was unbreakable, in her lifetime, they never left each other's side. Bunnie was educated in the Prince George's County Public School System and graduated from Suitland Senior High School. Soon after her graduation (1965), Bunnie began her career with Bell Atlantic. She retired from AT&T in 2001. Bunnie was known to be very caring and giving to all, she was really an angel in disguise. There was nothing she wouldn't do for anyone from the stranger walking down the street to the distant cousin's cousin. She had an abundance of love that she spread over the entire family, especially to her nieces, nephews and cousins. She was idolized by many who watched her leave home in business suit with an attaché case to get in her vehicle. Bunnie always drove a vehicle that her son and five youngest siblings could fit in as she was always taking them to the beach, drive-in movies, to visit relatives or whatever destination she had in mind that day. Her latest vehicle was a customized conversion van... But no matter the vehicle, she had her case of RC Cola in the trunk. A lover of music, Bunnie introduced Rodney and her younger siblings, nieces, and nephews to hand dance early on in their lives. They can sing along with songs from the 1950s, 60s, and 70s thanks to her vinyl music collection that she played every evening and weekend. We were all very blessed to have Bunnie in our lives and she will be missed by many but will live on in our hearts forever. Bunnie is preceded in death by her father, James L. Taylor, Sr.; her sisters, Patricia "Rhonda" Wise and Brigette "Coochie" Taylor; her brother, James L. Taylor, Jr.; her nephew, Christopher Taylor and her great nephew Tyler Newby. She leaves to mourn, her son, Rodney Rice, Jr.; grandchildren, Shanita Blake(William) and Kaylia Rice; great grandchildren, Janiah Long, Aubree Blake and Malani Ellis; her mother Geraldine Taylor; sisters Sharone Lewis Clarke (Craig-transitioned), Cheryl "Midget" Reeder (Robert-transitioned), Kyra Taylor, Rhobyn Costen-Sykes (Michael) and Stefani Costen. She was the proud aunt of 17 nieces and nephews, 27 great nieces and nephews and eight great great nieces and nephews. There are also a host of other relatives, co-workers and friends that will miss her dearly as well.

Diane C. Taylor, known affectionately as "Bunnie" was born on May 30, 1946 to James and Geraldine M. Taylor. The eldest of nine children, she was the caregiver of her younger siblings, cousins, aunts, etc. Baptized at the Church of the Incarnation,... View Obituary & Service Information

The family of Diane "Bunnie" Cecelia Taylor created this Life Tributes page to make it easy to share your memories.

Diane C. Taylor, known affectionately as &quot;Bunnie&quot; was born on...

Send flowers to the Taylor family.