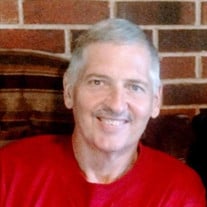 Douglas (Doug) James Harvey (affectionately known as Smiley), of Brandywine, MD, passed away on Tuesday, January 26, 2021 after a hard-fought battle with Alzheimer’s. Doug, born to Jacqueline (Jackie) Harvey and Dr. Lester James Harvey in Bellflower, California, took his first breath on September 14, 1955. He lived in California, Michigan, Puerto Rico, and Illinois before calling Maryland his home. Doug was an amazing soul from the get-go. He graduated from Frederick Douglass High School in 1974. Upon graduating from high school, Doug then went on to PG Community College and then on to Salisbury State University. He pursued and was awarded a degree in Physical Education in 1978. After teaching PE for some time, Doug left the education field and pursed a career as a Correctional Officer with Prince Georges County. Doug (#88) was with PGC Corrections for over 35 years and would retire as Master Corporal in 2015. On October 22, 1983, Douglas married Clothilda (Clo) George-Harvey. These two were as Friedrich Halm said, “Two souls with but a simple thought; Two hearts that beat as one.” Although they had no biological children during their union, with their union came Tehron George. Doug treated Tehron as his own and loved him as a father should. In 1988, the two gained a goddaughter, Candis, whom they both loved dearly and cherished as the daughter they never had. His immediate and extended family meant more to him than anything else in the world, something he often mentioned. He was unendingly proud of them and was passionate about being a great provider. Doug loved his sports. He was a pitcher for the Chesapeake Independent League where he won many championships in nail biting games. He played basketball for the Correctional Officers’ League. His proudest moments were being a player and a volunteer coach for the Midnight Basketball League. In an effort to keep the kids off the street during late hours when crime would be prevalent in drug and crime infested communities, youth would come together to play basketball. In January 1990, Midnight Basketball was recognized as one of President George H.W. Bush’s “Points of Life”. Doug was an avid fan of the Cubs, Detroit Lions and the Redskins (by marriage). His presence was felt by all he encountered, providing both gentleness and strength to family as well as mentorship to many young people in the community and to people who had the pleasure of calling him “friend”. Doug is survived by both his parents, Dr. Lester & Jackie Harvey; his loving wife, Clo Harvey; 1 Son, Tehron George; 1 goddaughter, Candis Henson; 4 grandchildren, Israel, Zariah, Carter and Cairo; 3 sisters, Linda Sadeghi, Leslie Harvey, and Lisa (Bryan) Andrus; his mother in-law Bernadine Garrett; Sister in-law, Sandra Niecy Lancaster; brother in-law, Orrin Dwight (Carolyn)Whitaker; 3 aunts, Ann Harvey, Thelma Vander Weide and Alice Johnson; 13 nieces and nephews; and a host of cousins and friends to forever cherish his memory.

The family of Douglas Harvey created this Life Tributes page to make it easy to share your memories.

Send flowers to the Harvey family.