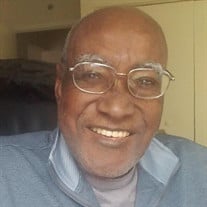 Evlyn Leslie Davy was born to Samuel Alexander Davy and Daisy Evelyn Davy (Wenham) on August 28, 1938 in St. Vincent and the Grenadines (SVG). Leslie was the second eldest of seven siblings. Leslie, fondly known to many as Tudder or Thuds, was a standout scholar at St.Vincent’s Boys’ Grammar School. He was employed by Royal Bank in SVG and St. Lucia for several years. He later sojourned to Washington, D.C., where he enrolled in Howard University’s School of Dentistry, graduating with his Doctor of Dental Surgery (D.D.S.) degree in May 1977. In 1970, Leslie married Linda Turner at the Church of the Holy Communion, where he remained an active member until his final days. Together, Leslie and Linda raised sons Matthew and Joel before parting ways. Leslie appreciated the outdoors and enjoyed camping with his boys, boating, birdwatching, as well as fishing. A marine enthusiast, he spent many years tending to aquariums in his home as well as authoring papers on raising fish. A favorite hobby that he shared with his son, Joel, was caring for turtles. A devoted father, Leslie spent countless hours championing the interests of his boys through their development. After many years in dentistry and oral surgery, Dr. Davy closed his private practice and returned to school to study radiology. He became licensed as an authorized medical radiation technician in the state of Maryland. Leslie then began his second career in radiology. He enjoyed 21 years working at Sibley Memorial Hospital in Washington, D.C. before his retirement in March 2011. A lifelong learner, Leslie remained a member of many professional organizations. Leslie was a philanthropic donor in deed and in kind, supporting the Bishop John T. Walker School for Boys in Washington, D.C. and the St. Vincent and the Grenadines Nationals Association (SVGNA) of Washington, D.C. In his retirement, he enjoyed spending time with family, friends, and neighbors in Southern Maryland. Additionally, Leslie loved traveling and spent much of his time in SVG, St. Lucia, and the islands of the Caribbean. He took pride in renovating his second home at Beachmont, SVG. In addition, Leslie was devoted to his church home, the Church of the Holy Communion, where his membership spanned over five decades. Leslie served in multiple capacities, from usher to being voted senior warden. He served on many working committees, the vestry, the usher board, and the men’s group, and was a lector, a Diocesan Delegate, and a member of the Grape and Wheat Connection. Leslie was a steadfast and faithful servant. Even after suffering a stroke in May 2020, Leslie was dedicated to his rehabilitative therapy, as he was eager to return to his independence. After several virtual visits with a host of family, the Lord called Leslie home on Tuesday, March 16, 2021, with his sister and niece at his side. Leslie leaves to cherish his memory his three children Dawn (“Patty”), Matthew, and Joel; three grandchildren Brook, Malcolm, and Dylan; siblings Clifford, Cecil, Louise, and Michael; and a host of nephews, nieces, family, church family, and friends. Virtual service: Saturday, March 27, 2021 at 1:00 p.m. EST https://youtu.be/a8pghd8ZMVs In lieu of flowers, donations may be made in Leslie’s memory to: Bishop John T. Walker School for Boys, Washington, D.C. Please visit the “Tribute Wall” on this website if you’d like to share memories or condolences with the family.

Evlyn Leslie Davy was born to Samuel Alexander Davy and Daisy Evelyn Davy (Wenham) on August 28, 1938 in St. Vincent and the Grenadines (SVG). Leslie was the second eldest of seven siblings. Leslie, fondly known to many as Tudder or Thuds,... View Obituary & Service Information

The family of E. Leslie Davy created this Life Tributes page to make it easy to share your memories.