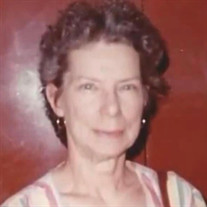 E. Louise “Weezy” Varelli, 98, of Temple Hills, MD, went to be with the Lord peacefully at her home on Tuesday, November 23, 2021, at 12:52pm. Until her last breath, she was surrounded by her closest loved ones and her loyal companion, Rebel. Louise was born February 16, 1923, to the late Midian and Ruth Joseph, in her grandmother’s home located in Washington, D.C. She was the eldest of 11 children. During her childhood and teenage years, Louise cared for her siblings as if they were her own, and was a devoted, obedient daughter to her parents. In the early 1940’s, Louise was offered a job as a carhop waitress at a drive-in restaurant in Philadelphia, PA by the manager at the time, Francis P. Varelli. While there, her and Frank fell in love and by August 8, 1942, they were joined in holy matrimony. Her late husband Frank, enlisted in the army as a paratrooper for the 82nd airborne and they moved to Fayetteville, North Carolina. While Frank served in three wars, Louise cared for the children and was devoted to her husband. She stood faithfully by his side and was an admirable army wife, always supporting Frank’s journey while in the military, both active and retired. During Frank’s last tour in Germany, Louise moved to Marlow Heights, MD to stay with her family and patiently await his return. During that time, she started working at Woolworth’s in 1957, and cared for their three children, Frankie, Tonda and Tina. Frank returned in 1963 and by June of 1964, they settled at the home that many of us have so many memories at on Tyburn St. in Temple Hills, MD. There, they provided a haven for their loved ones, especially their many grandchildren that came along through the years. Louise loved her grandchildren, great grandchildren, and great-great grandchildren more than anything in this world. She was loving, nurturing and protective and a solid force within their lives. As soon as you entered her home, you would find her refrigerator covered with generations of children and as you walked through the home, the frames on her furniture were filled of loved ones. Whether you called her Ma, Grandma or Nana, she was sure to instill strong Italian values in all of us and nothing compared to her love and support. Louise loved to cook for her family, with her requested specialty for the holidays being her “made from scratch” spaghetti that she would start early in the morning and cook all day. The flavorful aroma of the sauces and spices would fill the air as we all patiently waited for her to turn the stove off and sit in her chair. At that moment, we all knew it was time to eat and that we were going to have the best plate of spaghetti known to man. She also loved to tend to her landscape, still mowing her lawn well into her late 80’s, and her favorite flowers were roses, sunflowers, and azalea’s. She would care for her red rose bushes that lined the fence near the carport, and those bushes were used for a backdrop in many of our pictures together with her through the years. Louise also loved to read, color and draw, and she especially loved to do crossword puzzles in her favorite books called the Penny Press Puzzles. She could be found in her “chair” rocking, watching her soap operas or favorite shows, and doing a cross word puzzle on any given day with a grandchild lying next to her on the couch keeping her company. Though few words would be said during that time spent together, the comfort and peace of just being next to her was deeply felt. Louise is preceded in passing by her parents, Midian, and Ruth Joseph (DiGuiseppi). Her Loving husband Francis Powell Varelli Sr., and their son, Francis Powell Varelli, Jr. Her siblings, Grace Joseph, Anthony Joseph, Raymond Joseph, Paul Joseph, Ruth Ling, Mary Pagliocchini, Rose Antico and William Joseph. Louise is survived by her loving daughter and caretaker, Tina Louise Varelli and her eldest daughter, Tondelayo Francesca Varelli (Bobby Cox). Her siblings, Robert Joseph, and Margaret Pazdernick. Her grandchildren, Frank P. Varelli, John E. Varelli (Darlene), Paul M. Varelli (Cathy), James Thrift III (Kelly), Antionette L. Redding (Eugene), Danielle M. Varelli-Boatman (Marcus), Ashley R. Boatman (Geoff), Francis P. Varelli III and Jeremy S. Boatman. Her great grandchildren, Amanda Varelli (Ronnie), Jessica L. Naugle (Travis), J. Nicholas Thrift (Brittney), Jennifer L. Thrift, Brooklen M. Stewart (Kam, “The Kid”), Lily M. Chamberlain, Zoey N. Bowie, D’Marcus F. Johnson, J. Kash Boatman, Marielle A. Louise Johnson, Joseph Redding, and James N. Bowie. Louise is also survived by three great – great grandchildren, with one on the way in January, Lennox King Adams, as well as three generations of nieces and nephews. Family will receive friends for visitation on Tuesday, December 7, 2021 from 11:00am – 1:00pm and a Catholic service without Mass, from 1:00pm – 2:00pm, at the Lee Funeral Home, 6633 Old Alexandria Ferry Rd., Clinton, MD 20735. At a later date, the family will be holding a private service and burial at Arlington Cemetery for Louise’s final resting place, with her beloved husband, Frank.In lieu of flowers, the family asks that donations are made in memory of “Capt. Francis P. Varelli and wife Louise Varelli” to the Wounded Warriors Project. You may make a donation by visiting the website at https://www.woundedwarriorproject.org/donate

The family of E. Louise Varelli created this Life Tributes page to make it easy to share your memories.

Send flowers to the Varelli family.