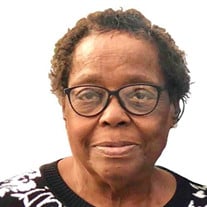 Elizabeth Jones, affectionately known as "Lil Sis", was born on October 5, 1944, to the late Corinthian and Geneva Edmondson in Wilson, North Carolina. She transitioned from this life on Friday, March 5, 2021, at the Cadia Healthcare in Hyattsville, MD. She was the fifth out of fifteen children of which six preceded her in death. Lil Sis grew up in North Carolina before relocating to the Washington Metropolitan Area around the late sixties/early seventies. She was educated through the North Carolina Public School System. Upon her relocation and prior to experiencing some health challenges, Lil Sis was gainfully employed in the hospitality field as well as being a skilled chef in her own kitchen! She prided herself in creating her flapjacks, sweet potato pudding and homemade cheese biscuits, just to name a few. She was well-known for her outspokenness and candour in all of her places of employment. She was a person that seemed to attract people because of her sassiness and or orneriness! She was loved and respected by all who knew her including her church family. She was actively involved and served as a member of Jericho Chapel in Landover, Maryland for three years. She was also an active member of Free Hope Baptist Church in Bladensburg, MD. Lil Sis was the fifth child, however, she thought of herself as the oldest and expected her older and younger siblings to address her as the oldest! She was always having discussion ( or argument) with one of her siblings about, "who is in charge!" Lil Sis was family-oriented. She was a single mother who cared for and worked hard to ensure her children were provided with everything they wanted and needed. Her children and grands were her life and always came first. Elizabeth leaves to mourn three children: Elvi Edmondson (Patricia of NC), Lahoma Edmondson (of MD), Michael Robb (Anita of GA); her eldest son Jeffrey Edmondson preceded her in death. Ten grandchildren: Jeffrey Wendell Edmondson and Michael Edmondson (both of DC), Antonio Herring ( of MD), Reginald Pitt (of NC), Chantelle Barnes (of NC), Genequa Edmondson (of NC), Deshanda Edmondson (of NC), Felicia Edmondson (Erica of MD), Tracy Foster (of MD), and Malik Butler (of MD). Five great-grandchildren : Tyla Horsey, Trevor and Travis Foster (of MD), Terrell Brown, Jr. (of NC), Lyric Battle (of NC), and one on the way. Her former husband, Charlie Jones, Sr., preceded her in death. Five brothers: Benjamin Edmondson (Jeanette of DC), LV Edmondson (of SC), Levi Edmondson (Yvonne of TN), Thomas Edmondson (of DC), James Edmondson (Teresa of SC); two sisters: Mary Edmondson (of NC) and Annie Edmondson (of NC). Elizabeth also leaves a host of nieces, nephews, great nephews/nieces, and cousins that are too numerous to list. She also leaves a host of aunts and uncles.

Elizabeth Jones, affectionately known as "Lil Sis", was born on October 5, 1944, to the late Corinthian and Geneva Edmondson in Wilson, North Carolina. She transitioned from this life on Friday, March 5, 2021, at the Cadia Healthcare in Hyattsville,... View Obituary & Service Information

The family of Elizabeth Jones created this Life Tributes page to make it easy to share your memories.

Send flowers to the Jones family.