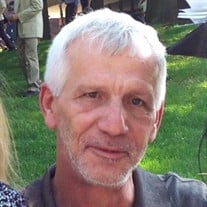 Longtime sheet metal instructor, father, brother and lifelong Prince George’s County resident Felix M. Bottalico died Friday, Jan. 8. Felix was born Sept. 11, 1959, to Mary Diane and Frank Pasquale Bottalico Sr. and was the middle child of three brothers, as well as younger brother to the late Carol Eddy, whom he considered a sister. He graduated from Frederick Douglass High School, where he was an athlete. He joined the Sheet Metal Workers Local Union 100 in 1979, where he was an apprentice before getting his journeyman license. He later became an instructor at Local 100, where he continued working up until his death. He also worked with the Architect of the Capitol in the 1990s, which included working on the roof of the Philip A. Hart Senate Office Building, for which he won a craftsmanship award. While Felix taught classes on sheet metal, he was a proficient welder and enjoyed spending time in the shop crafting artisanal pieces, including copper and brass lanterns, large decorative stainless steel flower pots, frames for puzzles he completed with his family and more. His enduring request for Father’s Day, birthdays and all holidays was to forego gifts and just spend time with him. Felix, 61, loved spending time with his children JR and Brandi, and teaching them how to use various tools. He was fiercely loyal and believed in being there for family. He would do anything for those he loved. He was proud of his children, as well as the home he built in Brandywine, and greatly missed his parents who died before him. He enjoyed the simple things like crabbing on the Chesapeake Bay with chicken necks and string, collecting more tools than he could possibly ever use, watching football, and “unwinding” after work by taking drives on the country roads of Croom. He was fond of a cold beer, preferably Busch, and wasn’t known to go anywhere without a pack of Marlboro cigarettes and a lighter. He was creative and had a penchant for designing and making things. For a few years in the early 2000s, Felix and his former wife of 27 years, Linda, hosted large annual Halloween parties at their home that featured a “haunted trail” through the woods with homemade stage coffins, a fake guillotine and other festive decor. He loved to eat at Mama Stella’s in Clinton for a nice dinner or somewhere where he could enjoy seafood or a good steak. And when he attended family gatherings, he almost always showed up with a platter of shrimp and cocktail sauce, no matter the occasion. Felix is survived by his older brother Frank Bottalico Jr. and his wife Joleen Bottalico; younger brother Dino Bottalico; son Gary Bottalico and daughter Brandi Bottalico; nephews Frank Bottalico III and wife Erika, John Eddy Jr. and wife Samantha; nieces Tina Matteson and husband Randy, Lisa Doerk and husband Mike, Cara Eddy Richards and husband Jowe, Ginger Eddy Suttle and husband Austin, Gina Colbert and husband Jason. He’s also survived by aunts, uncles and many cousins. Visitation will be held at Lee Funeral Home, 6633 Old Alexandria Ferry Road in Clinton, on Thursday, Jan. 21 from 2 to 4 p.m. and from 6 to 8 p.m. On Friday, Jan. 22, at 11 a.m., there will be a service, which will have a limit of 50 people and masks are required, at the Most Holy Rosary St. Joseph Center at 11700 Duley Station Road in Upper Marlboro. Following the service there will be a procession to Resurrection Cemetery. Due to the COVID-19 pandemic, the family will host a celebration of life at a later date.

The family of Felix M. Bottalico created this Life Tributes page to make it easy to share your memories.

Send flowers to the Bottalico family.