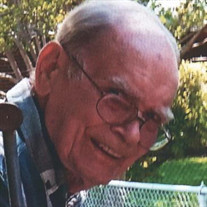 Frank Burton Boling, age 91; five generation family patriarch; a 60-year-resident of the Berkshire Community within District Heights-Forestville, MD, passed away on Saturday, August 22, 2020 at Calvert Health Medical Center, Calvert County, MD. Frank’s wife of 72 years, Norma Florence Ford Boling, age 90, preceded him in death on March 16, 2018. Frank was the son of Jesse Burton Boling (1902-1978) and Helen Louise Chambers (1911-1944), whose families were originally from Spotsylvania County, VA. He is survived by his three children and their spouses: Joanne Carol Dickinson (Bob), of Owings, MD; and his two sons, Frank Roy Boling (Diane), of Chesapeake Beach, MD; and John Arthur Boling (Joyce), of Waldorf, MD. He also leaves to mourn him, nine grandchildren, 11 great-grandchildren, and 9 great-great-grandchildren - most live locally in parts of Southern Maryland; and his two loving and four-legged children “Sandy” and “Cody”. Frank and Norma married in their teens. Frank served in the United States Navy (1945-47) and was a career printing pressman for 42 years, until his retirement in 1987 following a stroke. He was a member of Saint Pius X Knights of Columbus in Forestville, MD, for nearly 50 years, and a member of its 4th Degree - men who choose to embrace good citizenship and patriotism, leading efforts to reach veterans and active military. For nearly 40 years Frank and Norma were active members of Mount Calvary and St. Bernadine’s Catholic Churches. Frank is known for his dedication and commitment to family; his sense of humor and quick wit, a man of his word with a kind and gentle-heart who always (even from the age of 5), put his family’s needs above his own. A 9 am viewing, followed by an 11 am Celebration of Life is scheduled for Monday, August 31, at Lee Funeral Home Calvert, 8200 Jennifer Lane, Owings, MD. Elder Bill Collette, Chesapeake Church, Huntingtown, MD will officiate. Interment will be at Resurrection Cemetery, 8000 Woodyard Road, Clinton, MD. The family would like to thank all family, friends, and neighbors for their kind words of sympathy and condolences during this difficult time. In lieu of flowers please make donations in Frank’s name to: Humane Society of Calvert County, P O Box 3505, Prince Frederick, MD 20678 ~ OR ~ Alzheimer’s Foundation of America, 322 Eighth Avenue, 7th Floor, New York, NY 10001 - phone: 866-232-8484 - E-mail: [email protected] NEW GUIDELINES FOR ATTENDING VISITATION / SERVICES. - 50 to 75 people max at any given time in Funeral Home. - Limit visitation to 15 minutes in visitation room to allow for others to express their condolences. - Funeral Services in Chapel limited to 70 people with four (4) people per pew. - Masks and six foot social distancing still applies.

The family of Frank Burton Boling created this Life Tributes page to make it easy to share your memories.

Send flowers to the Boling family.