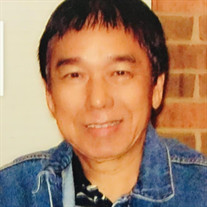 Frank Abenojar Camson Sr. has gone home to be with the Lord at age 69. He took his last breath at University of Maryland Medical Center, Baltimore, MD on August 19, 2020, Wednesday. Frank Sr. was born on September 25, 1950 in Talugtog, Nueva Ecija, Philippines, to Primitivo and Juliana Camson. Frank migrated to the United States in 2006, and was a resident of Oxon Hill, MD. He graduated from Polytechnic University of the Philippines with a Bachelor’s Degree in Commerce. He was a longtime Bank Accountant in the Philippines. On June 29, 1975, Frank married his best friend Lourdes, a judicial stenographer. They had five beautiful children, who were the most important part of his life. Frank was a devoted father and a caring husband. He loves spending time with his family, taking trips out of town, eating out in different local restaurants, and going to malls and parks. Frank, being a very diligent student in his early years, inspired his children to excel in school especially in the areas of Math, History, and Social Studies. Most importantly, he taught his children the value of love, respect, generosity, and compassion to others. Frank was a great teacher and mentor to his children. Frank enjoyed listening to music and traveling. He is fond of cooking and watching action movies. He likes sports especially basketball and bowling. He played bowling and championed few company tournaments, coached fellow employees in basketball play-offs, and sponsored basketball leagues in his local community. He is very much respected, admired, and well-liked by his friends, neighbors, and colleagues. Frank is a spiritual person and a man of few words. He expresses his love and compassion by serving people and sharing his wisdom to those in need. His humility and kind heart manifested throughout his entire life. He will be deeply missed by his family, friends, and all who knew him. His physical body may leave the earth, but his legacy will live on forever. Frank Abenojar Camson Sr. is survived and lovingly remembered by his wife, Lourdes Camson; children - Grace, Jo Ann, Frank Jr., May, and Francis; grandchildren; sister, Brigida; brother, Perfecto; nephews, nieces, great grandchildren, and relatives in his hometown Pasig, Philippines. A private funeral service is scheduled for 10:00AM on August 29 at Lee Funeral Homes, Clinton, MD. Reverend Gary Villanueva will officiate the prayer service at 11:30AM. A private interment service (family only), presided by Deacon Paul Aoster, at Resurrection Cemetery, Clinton, MD will follow. The family would like to thank everyone who expressed their sympathy and condolences during this difficult time. At families request temperatures will be checked at the door to gain entry into the building. Anyone 100'+ will be respectfully turned away at the door.

Frank Abenojar Camson Sr. has gone home to be with the Lord at age 69. He took his last breath at University of Maryland Medical Center, Baltimore, MD on August 19, 2020, Wednesday. Frank Sr. was born on September 25, 1950 in Talugtog, Nueva... View Obituary & Service Information

The family of Frank Abenojar Camson Sr. created this Life Tributes page to make it easy to share your memories.

Frank Abenojar Camson Sr. has gone home to be with the Lord at...

Send flowers to the Camson family.