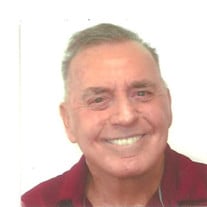 Garrette Walton Peck, III, age 79, of Dunkirk, MD, passed peacefully on Sunday, December 6, 2020 after a long chronic illness. He was survived by his wife, Sheila, son, Garrette (Victoria), stepson, Colby Eglinton (Natalie) and grandchildren, Garrette Peck, V, "G5", Brooks, Jill and Ethan Eglinton, sister, Gabrielle Holcombe (David) and beloved nieces, nephew and grand-nephew. He was predeceased by his mother, Virginia Boyd Peck, father, Garrette Walton Peck, II and his brother, Boyd Gordon Peck. Garrette was born in Pensacola, FL on November 26, 1941. The family lived in New Orleans, LA, and Culver City, CA, before relocating to Washington, D.C. in the summer of 1949. He attended Sacred Heart School in the Mount Pleasant neighborhood in Northwest Washington. The area would serve as a source of joy and pride for Garrette, as he acquired wonderful, life-long friends. Garrette enlisted in the Marine Corps in 1966. Following boot camp at Camp Pendleton, he deployed for the first of three combat tours in Vietnam with Company H, 2nd Battalion, 9th Marines, 3rd Marine Division. He served as an Infantryman, rising to the rank of Staff Sergeant. He was awarded three Purple Hearts and the Silver Star Medal for, “conspicuous gallantry and intrepidity in action…” Garrette was medically retired from USMC and attended the University of Maryland in College Park where he studied journalism. He held various positions with the Federal Government, most notably as a network administrator for the Departments of Defense and Treasury. Garrette, perhaps, will be most remembered for his philanthropic work with various charities in the United States and Asia. In 2005, with the help of other veterans and Marines from 2/9 Battalion, he helped to build a school and orphanage in Vietnam for children with mental and physical disabilities. He generously donated his time, experience and finances for the needs of the children in these orphanages, whom he visited several times a year. He was an advocate for veterans who found themselves overwhelmed with the VA system and he actively collected donations towards the creation of the Veteran’s Memorial Park in Chesapeake Beach, MD. Garrette will be remembered for his kind spirit, generosity and riotous sense of humor. There will be a visitation on Sunday, December 13th from 2 to 4 pm at Lee Funeral Home Calvert, 8200 Jennifer Lane, Owings, MD 20736. Interment will take place at Arlington National Cemetery, at a later date. In lieu of flowers and in keeping with Garrette’s charitable spirit, the family suggests donations to the Calvert County Toys for Tots program or Calvert Hospice, P O Box 838, Prince Frederik, MD 20736 ~ calverthospice.org. NEW GUIDELINES FOR ATTENDING VISITATION / SERVICES. - 50 to 75 people max at any given time in Funeral Home. - Limit visitation to 15 minutes in visitation room to allow for others to express their condolences. - Funeral Services in Chapel limited to 70 people with four (4) people per pew. - Masks and six foot social distancing still applies.

The family of Garrette Walton Peck, III created this Life Tributes page to make it easy to share your memories.