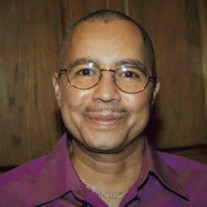 Gary Lenard Anderson, 69, of Clinton, MD, passed away peacefully on Saturday, January 2nd, 2021 after a long and valiant battle with heart related ailments. Gary was born on March 7th, 1951 to Carlton & Mildred Chase in Washington, DC. Shortly after graduating from Spingarn Senior High School in 1969, he went on to join the 113th Fighter Wing, Air National Guard, Andrews Air Force Base, MD in July of 1970. He passionately served in a lustrous career spanning 36 years. After briefly enjoying retirement, he chose to return to the Air National Guard as a civilian contractor in 2007 to continue serving our nation until 2016. During his time at Spingarn, Gary met his wife of 10 years Virginia. The pair had two children: Shauntelle and Jerohn and two grandchildren. Gary was a dedicated father and grandfather who greatly emphasized the importance of family. He made every effort to attend the recitals, football games, graduations, weddings, birthdays and various events of every member of the family, both immediate and extended. In many cases he would produce better photography than those that were actually hired to document the occasion. Gary introduced his kids to his two favorite hobbies, bowling and fishing, at very early ages. He often sparked some jealousy among his friends and coworkers when describing the amount of time he spends enjoying these activities with his children even after both were well into adulthood. Aside from those pastimes, which he was very good at, Gary was great at the art of storytelling. His masterful and detailed descriptions, in conjunction with the hand-movements of an orchestra conductor, would magically open a portal to a place and time that his audience could step into and venture around. Gary’s faith was strong and unwavering. When times were most difficult and as his health was fading, he always held on firmly to his faith in God and his Lord and Savior Jesus Christ. He was active in various church activities and volunteered his time in the maintenance and upkeep of church grounds. Gary will be joining his mother Mildred Chase and brother Tehran Anderson in Homecoming Glory. His memory will live on through his children Shauntelle and Jerohn Anderson (wife Julie); his grandchildren Jeneva and Juliet Anderson; his father Carlton Chase; his brothers Kenneth Anderson (wife Sherrie), Bryan Chase (wife Laura) and Carlton Chase Jr.; his ex-wife Virginia Anderson Waters, and a host of cousins, nieces, nephews, brother-in-laws, sister-in-laws and close friends. Acknowledgement: The family wishes to express sincere appreciation for every act of kindness. May God continue to bless each of you, is our prayer. A celebration of life will take place on Wednesday, January 13th, 2021 at Central Baptist Church, 5600 Old Branch Ave., Camp Springs, MD. The viewing will be from 10-11am, followed by a private service for family. In lieu of flowers, please make a donation to Gary’s charity of choice: Make A Gift - Chesapeake Bay Foundation (cbf.org) Gary LeNard Anderson Obituary - Visitation & Funeral Information (leefuneralhomes.com) Please address any cards or letters of condolence to: Shauntelle Anderson 5069 Jay St. N.E. Washington, DC 20019 Join Zoom Meeting https://us04web.zoom.us/j/647046473 Meeting ID: 647 046 473 One tap mobile +19292056099,,647046473# US (New York) +13126266799,,647046473# US (Chicago) Dial by your location +1 929 205 6099 US (New York) +1 312 626 6799 US (Chicago) +1 669 900 6833 US (San Jose) +1 253 215 8782 US +1 301 715 8592 US +1 346 248 7799 US (Houston) Meeting ID: 647 046 473 Pass Code 5600 Find your local number: https://us04web.zoom.us/u/fd7YaUE1p4

The family of Gary LeNard Anderson created this Life Tributes page to make it easy to share your memories.