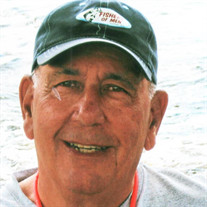 George Edward Ferris of Sunderland, MD, age 83 years, passed at his residence on Saturday, November 13, 2021 after a courageous battle with cancer. He spent his last days surrounded by his loving family and friends. Born in Jersey City, NJ son of Charles and Helen [Knowles] Ferris. His father died the day before his 7th Birthday and he was raised by his devoted and loving mother. At the age of 17, George enlisted in the Navy and brought a buddy along. After 20 years of service, he was Honorably Discharged. Among the many distinguished honors and medals he was awarded, the National Defense Service Medal; Vietnam Service Medal; Armed Forces Expeditionary Medal (Congo); Good Conduct Medal (Second & Third Award), just to name a few. George met Claudia Nicks at the NAF in Washington, DC while they were both serving in the Navy. George was a loving husband to Claudia for 53 years. Their passions included being with his wife and children, taking them on many camping trips, holding their hand when needed, or just giving sound advice. After leaving the Navy, George was hired by the Capitol Power Plant, and worked for 25 years for the Architect of the Capitol. George was an engineer of epic proportions. Because of his engineering background, he could fix anything including plumbing, electrical, carpentry and automotive. His family teased him that he was the hardest working, true “Jack of all Trades”. Wherever George went, someone always approached him for guidance. Whether personal advice or what was the best tool to get from the hardware store, to get a job done, he was always willing to lend a hand. George also loved to spend his free time fishing, crabbing and hunting. George was a hardworking man and a great provider to his family. He was honest and never met a stranger. He always helped those in need, putting his family and others in front of his own wants and desires. Even during his last days, he was worried about his family and those caring for him. He will be remembered for his kind, caring and easygoing wit that made him well loved by everyone who entered his life. George was the beloved husband of Claudia Ferris of Sunderland, MD; devoted father of Carolyn Dailey and her husband Eric Dailey of Bethlehem, GA, Tom Ferris and his wife Connie Ferris of Loganville, GA, Christine Mauger and her husband Gary Mauger of Cornelius, NC, Robert Ferris and his wife Deidre Ferris of Sterling, VA and Kelly Freeman and her husband Tom Freeman of Partlow, VA; loving grandfather of Sara Bloom, Travis Ferris, Shelby Dailey, Caitlin Dailey, Emily Dailey, Ryan Dailey, Bryce Petitt, Shaina Ferris, Cheyanne Freeman, Austin Freeman, Brooke Nolte, Carlie Baker and Chad Baker. He was also survived by seven great-grandchildren. Honor and committal prayers will be offered on Tuesday, December 7, 2021, 10:30 am at Maryland Veterans Cemetery, Cheltenham, MD. **For those desiring, contributions in memory of George may be directed to: Calvert Hospice, P O Box 938, Prince Frederick, MD 20678 – www.calverthospice.org.

George Edward Ferris of Sunderland, MD, age 83 years, passed at his residence on Saturday, November 13, 2021 after a courageous battle with cancer. He spent his last days surrounded by his loving family and friends. Born in Jersey City, NJ... View Obituary & Service Information

The family of George Edward Ferris created this Life Tributes page to make it easy to share your memories.

Send flowers to the Ferris family.