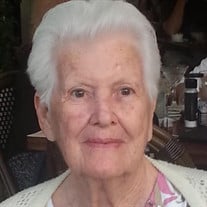 Grace Blankenship Sullivan, age 92, passed away peacefully on August 30, 2021 with her family by her side. Grace was born on January 3, 1929 to Mary Hopwood Blankenship and Richard E. Blankenship. Grace was one of four children. She was preceded in death by her parents, brother William, and sisters, Mary Helen Armstrong and Catherine Milbrandt. Born in Washington, D.C her growing up years was spent attending Catholic Schools in DC. As a child Grace would spend her summers in Newport, Rhode Island. During that era, it was not unheard of for young ones to halt their education for work to support the needs of their family during their teenage years. Grace went to work around age 15. She worked in the People’s Drug store as a soda fountain clerk, and then advertising. It was on a triple blind date when Grace met George. Their courtship was brief and they married in November, 1946. The couple lived in the DC for a few years before moving to Ardmore. Together they raised their family of 5 and life was good. Just shy of their 21st anniversary, George died after a long illness. Grace was a dedicated mother first and foremost. Her children came first and she treasured every moment with them. Grace loved to dance and taught George how to dance after putting 5 children to bed and closing the shades. In 1956 Grace & George moved to Cheverly where over the years they fostered many young children, including Wayne DeParto for 9 years. Grace was an active member of St. Ambrose Catholic Church and also on their bowling team. In 1963, Grace and George cofounded Ardwick Carry Out in Landover, MD. She had a vivacious personality and made friends everywhere she went, and her customers at the carry out loved her as well. Upon George’s death in 1967, Grace continued to build the business and expanded by erecting a new building in 1969. Grace was blessed with an angel who became her friend and companion, when she met Earl Harbin. She welcomed him into the lives of her children. Grace & Earl loved to travel, driving across the country or attending many super bowl games. Grace was an active member of the Restaurant Association and the carry out that she loved, is still in the family. Grace retired in 1979 and she and Earl would live in Florida during the colder months, and return for about 4 months when the weather in Maryland would warm up. Earl passed in 2011. Her daughter Margaret stepped into his place and became her health care companion. While in Florida Grace worked for the local Hospice, at the local hospital in admitting, St. Francis of Assisi’s food bank in Florida, Meals on Wheels, and here locally Our Lady of Sorrows Catholic Church. Volunteering in her community suited her servant heart. She will be sorely missed. While in Maryland Grace would open her house Tuesday nights for spaghetti dinner, all were welcome and many memories were created. Beloved wife of the late George W. Sullivan; Devoted mother of Margaret Lavin of Deale, MD, Paul Sullivan (Jean) of Parkville, MD, George Sullivan (Sandy) of Brooms Island, MD, Edward Sullivan of Seattle Washington and Patrick Sullivan (Robin) of Upper Marlboro, MD. Also survived by 13 grand-children and 19 great grand-children. The family will receive friends at Our Lady of Sorrows Catholic Church 101 Owensville Road, West River, MD 20778 on Friday, October 1, 2021 from 10:00 AM – 11:00 AM where a Mass of Christian Burial will be celebrated at 11:00 AM. Interment will follow at Cedar Hill Cemetery 4111 Pennsylvania Avenue, Suitland, MD 20746. In Lieu of Flowers, contributions in memory of Grace may be directed to: Online at https://ipffoundation.org/donate or mail to Idiopathic Pulmonary Fibrosis Foundation, 21301 S Tamiami Trl Ste 320 PMB 226, Estero, FL 33928

Grace Blankenship Sullivan, age 92, passed away peacefully on August 30, 2021 with her family by her side. Grace was born on January 3, 1929 to Mary Hopwood Blankenship and Richard E. Blankenship. Grace was one of four children. She was preceded... View Obituary & Service Information

The family of Grace Blankenship Sullivan created this Life Tributes page to make it easy to share your memories.

Send flowers to the Sullivan family.