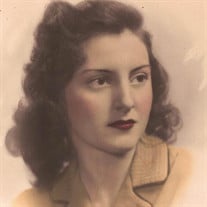 Mrs. Ford was born Helen Marie Hall on 1 June 1928 in Upper Marlboro, Maryland, the daughter of Hamilton Hall and Marguerite (Ryan) Hall. She attended school at St. Mary of the Assumption parish school. Through her life she remained devoted to the values instilled there by the sisters of the Immaculate Heart of Mary. After leaving St. Mary’s she attended and graduated from Upper Marlboro School. She retired after 37 years of employment by the federal government on 3 June 1987. During her federal employment she served on Andrews Air Force Base primarily as the administrative assistant for several successive Base and/or Wing commanders. Her service was marked with regular awards for outstanding service, including awards from the U.S. Air Force as civilian employee of the year. Her lifelong devotion to Upper Marlboro was exemplified by her service as a Town Commissioner for Upper Marlboro. Elected to that office in 1984 she served 11 consecutive two-year terms as a commissioner. Following her retirement from federal service in 1987 she served as president of the town commission for 18 years beginning in 1988. As president of the board of town commissioners she also functioned as the primary administrative officer for the town, a task that regularly demanded 40 hours or more per week. During her tenure, the commissioners refused any increase in their nominal salary. When she left office in 2008, the town enjoyed a surplus of over two million dollars in its treasury. In 2004 Mrs. Ford was inducted into the Maryland Municipal League Hall of Fame. Along with her love of Upper Marlboro, Mrs. Ford was devoted to her country and her family. She is preceded in death by her brothers: Hamilton Hall, Jr. and Maurice Hall and her husband Willie Ray Ford. She was a loving and devoted mother, grandmother, daughter and aunt. She is survived by her son (William) Ray Ford, her grandchildren, Blaine, Caitlin and Madeline Ford and her daughter-in-law Eileen Ford. To send flowers or a memorial gift to the family of Helen Marie Ford please visit our Sympathy Store.
To order memorial trees or send flowers to the family in memory of Helen Marie Ford, please visit our flower store.