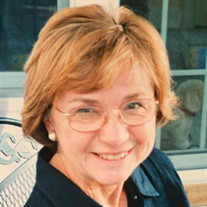 Helena Mann-Melnitchenko Teacher Passed away on November 7, 2021, in Owings, Maryland, at the age of 83 from cancer. Helena Lysyj was born in Ukraine in 1938. Keeping one step ahead of the Communists, her family reached the American Zone in Germany and spent five years in Displaced Persons camps. The family immigrated to the United States in 1950. She received a bachelor’s degree in French from Queens College in New York City and a master’s degree in education from the University of Hawaii. Together with her husband, Edward K. Mann, an officer in the United States Air Force, they traveled the world and lived in Turkey, France, Japan, and at various other bases. Colonel Mann, to whom she was married for 25 years, died in 1985 and is buried at Arlington National Cemetery. Helena began her teaching career in Hawaii, teaching French and art. In Alabama, she taught French and English at a private secondary school and Russian at Troy State University. She taught French from 1976 to 1989 at Woodbridge Senior High School in Virginia, where, for the last three years, she was the chair of the Foreign Language Department. Both of her daughters were her students during her tenure, among the hundreds of students taught by this passionate teacher. In 1989, she left the Washington area for Dallas, Texas when she married her second husband, Eugene Melnitchenko, an investment analyst. For the next dozen years they lived in Texas, Maryland, and California, returning back to the East Coast upon retirement. Ms. Mann-Melnitchenko wrote memoirs, travel and literary essays and newspaper articles, and co-authored two books with her husband. She loved poetry, and brought a touch of European style to everything she did. She was a member of the Washington Independent Writers, Writers by the Bay, and St. Andrew Ukrainian Orthodox Cathedral. Helena was predeceased by her husband Gene, to whom she was married for 31 years, by her two step-sons, Dereck and Mark, and by her brother, Ihor Lysyj. She leaves two daughters, Katherine Mann (Michael Levy) of Easton, MD and New Zealand, and Valerie Mann (Tim Webster) of Arlington, VA, and granddaughters Alexandra and Katherine Webster, and many other relatives. Helena was a loving and proud “baba” to her cherished granddaughters. A service will be held at St. Andrew Ukrainian Orthodox Cathedral 15100 New Hampshire Avenue Silver Spring, MD 20905 on Sunday, December 19, 2021 at 1:00 PM. Interment will be held at Arlington National Cemetery, 1 Memorial Avenue Arlington, VA 22211 on Wednesday, January 5, 2022 at 3:00 p.m. Donations may be made in her memory at United Ukrainian American Relief Committee, Inc., 1206 Cottman Ave., Philadelphia, PA 19111 www.uuarc.org/ways-of-giving/online-credit-card-donations/; kindly note “Soup Kitchen” on the memo line of checks payable to UUARC, or in the online comments section.

Helena Mann-Melnitchenko Teacher Passed away on November 7, 2021, in Owings, Maryland, at the age of 83 from cancer. Helena Lysyj was born in Ukraine in 1938. Keeping one step ahead of the Communists, her family reached the American Zone... View Obituary & Service Information

The family of Helena L. Mann-Melnitchenko created this Life Tributes page to make it easy to share your memories.

Customized sympathy cards. Mailed for you.