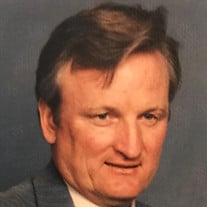 On Saturday, December 19, 2020, James Henry Elliott, Sr., passed away peacefully at Medstar Union Memorial Hospital due to complications related to Amyotrophic Lateral Sclerosis (ALS) and Pulmonary Fibrosis at the age of 77. Jimmy’s journey will continue as he joins his late father James Richard Elliott and his mother Margaret Hinckley Lynn (Elliott-Booth) and Jack Lynn, and his little brother LeRoy “Roy” Elliott. He leaves behind his loving wife and true friend of 40 years, Elizabeth “Betty” Agosto Elliott; three children - Hope Lynn Osbrink and son-in-law John Joseph Osbrink, James “Jay” Henry Elliott, Jr., and daughter-in-law Elaine Marie Elliott, Robyn Louise White and former son-in-law Ronald Edward White I. He will be dearly missed by all five of his grandchildren Ronald Edward White II, Michael Joseph Viola II, Faith Louise Baker and husband Chris Baker, Alyssa Nicole Elliott, and Shane Michael Elliott. He is also survived by his siblings and their spouses: Constance Lee Conte, Diane Delores Starbird and husband Sherwood Starbird, Alvenia Christina Bowles and husband Oliver “Boogie” Bowles, Richard Jerome Elliott, Leslie Mark Elliott and wife Diane Elliott, and George Philemon Elliott and wife LaDonna Elliott. As well as his numerous nieces and nephews. Jim enlisted in the United States Navy during the Vietnam era, during which he proudly spent his years aboard the U.S.S. Enterprise as a F4 Phantom Mechanical Engineer. He began his civilian career in the United States Secret Service - Uniformed Division (1972) under President Richard M. Nixon. A position he proudly referred to often. He spent the latter part of his career as a Senior Project Manager in the field of construction. Jim was a noble, dedicated, and warm-hearted husband, father, grandfather, brother, and uncle. He protected his family first and foremost with everything he had and would stand his ground to do anything necessary to protect his family. He raised his children in the same way - to treat everyone with respect and expect nothing less from others. As he would say “What is right is not always popular and what is popular is not always right.” His love and patience was shown to all of his grandchildren as he enjoyed engaging in conversations and listening to every word they would say. Sharing detailed stories with them about his time on the U.S.S. Enterprise with pride and honor. He talked and reflected often with a smile, on the times he spent hunting, working on old cars, and the many escapades he had during those times. He was an avid collector of Elvis Presley memorabilia, and could sing any Elvis tune. He deeply appreciated every moment with his family - whether it be long drives through the mountains, working on or talking about cars, or simple phone conversations regarding today’s politics. To know Jim is to understand how deeply patriotic he was and how passionately he trumpeted the responsibility of every citizen to cast a vote and make a difference for the future of this country. His children were taught to approach that voting booth with honor and a pure desire to support the democratic process that keeps this country united and strong. His life will be celebrated 12 January 2021 from 1030 (EST) - 1230 HRS (EST) at Lee Funeral Home Calvert, 8200 Jennifer Lane, Owings, MD 20736. He will be laid to rest with military honors at 1345 HRS, at Maryland Veterans Cemetery 11301 Crain Highway, Cheltenham, MD 20623 In lieu of flowers the family would like you to make a donation in his name to the Wounded Warriors Project - Addressing Barriers Faced by Veterans Exposed to Toxicants. James. Little Jimmy. Jimmy. Jim. Dad. We love YOU the most! NEW GUIDELINES FOR ATTENDING VISITATION / SERVICES. - 50 to 75 people max at any given time in Funeral Home. - Limit visitation to 15 minutes in visitation room to allow for others to express their condolences. - Funeral Services in Chapel limited to 70 people with four (4) people per pew. - Masks and six-foot social distancing still applies.

The family of James "Jim" Henry Elliott, Sr. created this Life Tributes page to make it easy to share your memories.

Send flowers to the Elliott, family.