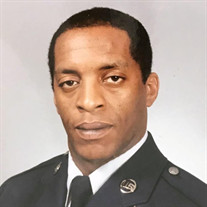 James Kenneth Radford was born in Philadelphia, Pennsylvania on March 8th, 1957 to the late James and Eva Radford. James attended Urban Career Education Center High School in Philadelphia, PA. After high school, he enlisted in the Air Force Reserves in 1977 and finished basic training at Lackland AFB, Texas. He proceeded to Rantoul, Illinois for aircraft maintenance school and in March 1978 James arrived at his first duty station McGuire AFB, New Jersey. By 1985, James left the Air Force Reserves and started his journey with the DC Air National Guard until he retired on February 14, 2013 as Senior Master Sergeant. During his service in the military, he was able to travel the world and indulge in many cultures. His favorite country/city to visit was Jerusalem, Israel due to its ancient history and religious roots. While thriving in his career, James wanted to further his education and attended University of Phoenix where he received his Associates Degree on September 13, 2010 and his Bachelor of Science in Business on June 13, 2015. He loved sports especially football (Fly Eagles Fly!) and golf. James was an active participant in many golf groups and competed in amateur tournaments several times per year. For leisure, he enjoyed taking family and friends on his boat to sail and fish. James also enjoyed club organizations. He loved building and competitively racing remote controlled cars. He later started he own company and race series called JR’s Race Place. He was a member of a local bowling team, ”Full House”, and the sports car club ”Crossfires of Maryland”. If we can include debate as a sport, then James was The Great Debater, especially with his brothers. James had a passion for all types of genres of music. He would express his love for music either by playing drums, singing or even being the DJ for parties and events. James accepted Christ as a young child and rededicated himself in 2004 when he joined United in Christ Seventh Day Adventist Church. James’ final church home was Breath of Life Seventh Day Adventist Church. He was an active member and served as a Deacon, Pathfinder Leader, Men’s Ministry Leader, Audio Visual Director and Choir Member. Breath of Life was like his second home. After a 10-year battle with Multiple Myeloma, James finished his work on earth to be with the Lord. James died in his home on Monday, December 7, 2020 with his family by his side. James is survived by his wife of 37 years, Linda Radford, brothers Sayfuddeen Tayamullah (Fajr), Karl Radford (Joyce), Michael Radford (Lydia), Richard Radford and sister Janet Radford. Five daughters: Charity Nelson (Antoine), Jennie Radford, Jasmin Gabriel (Christian), Kamariah Blackman, Annalise Radford-Tutt. Ten grandchildren: Fabian Morrison, Angel Morrison, Christopher Wilson-Radford, Antoine Nelson II, Tredon Stevenson, Jayden Stevenson, Nylah Gabriel, Paris Stevenson, Christian Gabriel Jr., and Alexandria Simmons. Three great grandchildren: Fabian Morrison II, Ayden Ellerbe and Jy’Zelle Morrison, and a host of nieces, nephews, family and friends.

The family of James K. Radford created this Life Tributes page to make it easy to share your memories.

Send flowers to the Radford family.