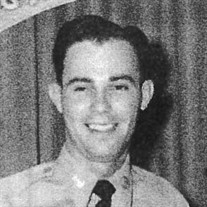 James "Jim" Michael Surles (age 90) was born in Fredericksburg, VA. The son of the late Robert and Katie Surles. In April 1949, at the age of 17, Jim entered the United States Air Force. Over the span of 20 plus years, with the exception of military schools, he was stationed in Japan, Korea, Okinawa, Turkey and Vietnam. With a career in the communications field, it was usually always San Antonia, Texas and then back overseas. He retired in December 1969 from Andrews Air Force Base, MD. Over the next 20 years, he worked at the Supreme Court of the United States as a member of their police force. His second and final retirement was August 1990. After that, he decided enough was enough and he was going to sit back and enjoy life, work in his yard, and do whatever he wanted with his wife, Marcy. He loved his small family with all of his being. No, he didn't build bridges, climb mountains or invent anything -- he never set any kin d of record, but he always had a smile on his face, was honest and kind to everyone. Even in later years, as his health declined, he gave it his all. He valued his friends and their many kindnesses and especially the love and support they provided to him and Marcy. He tried to be the best husband/father/grandfather and friend possible - someone you could trust with your life. He is survived by his wife of 67 years, Marcy; son, Robert "Bob"(Sharon) whom preceded him in death; granddaughter, Katelyn; and other relatives. Bob's death in November 2020 (not from Covid-19) hit him really hard. Jim was a true southern gentleman, out to lend a hand; and ordinary, everyday man (in an extraordinary way) forever making sure that he thanked every single person for anything they did. He earned his place in life by his actions, not words. May he rest in peace. There will be no services, no funeral. He will come home to be with Marcy until it is her time to leave this earth.

James "Jim" Michael Surles (age 90) was born in Fredericksburg, VA. The son of the late Robert and Katie Surles. In April 1949, at the age of 17, Jim entered the United States Air Force. Over the span of 20 plus years, with the exception of... View Obituary & Service Information

The family of James Michael Surles created this Life Tributes page to make it easy to share your memories.

Send flowers to the Surles family.