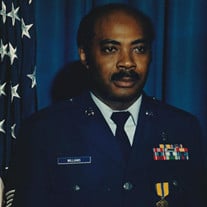 On July 30, 1951, James Henry Williams was born in Petersburg, Virginia to the late Reverend John Williams Sr. and Virginia Jones Williams. James entered eternal rest on Saturday October 16, 2021. James accepted Christ at an early age and was baptized at Sixth Mount Zion Baptist Church. He was a member of the Junior Choir and the Boy Scouts, Troop 474. After graduation from Armstrong High School, James attended Shaw University in Raleigh, NC where he majored in Mathematics. James left Shaw because of the strong urge to serve his country. James enlisted in the United States Air Force where he reached the rank of Master Sergeant. James retired in 1991 after serving 20 years. Retirement wasn't an option for him, therefore, he decided to go work at Southern Maryland Hospital where he established the Biomedical Department. After his tenure at Southern Maryland, he went on to be employed by the Veterans Hospital in Washington, DC where he served as the Chief of the Biomedical Department. He retired from the Veterans Hospital in 2009. James was an avid Washington Football team fan. He loved fishing, gardening and being a mentor to many. James loved working with his hands and was always a "Mr. Fix It" man. He could also play a mean alto saxophone. James most treasured possession was his family. James was preceded in death by his father and mother, James, Sr. and Virginia Williams, three brothers, Richard Morton, Ernest Morton and John Williams Jr. He is survived by his sister-in-law, Jacqueline Williams. James leaves to cherish his memory, his loving and dedicated wife of 24 years, Kathy; his daughters Eboni (Gregory) of Pennsylvania, Jalisa Johnson of Hilton Head, SC, son Corey (Melinda ) of Maryland, sister Reverend Belinda Cosby of Richmond, VA, brother-in-law Richard Spikes (Sheila) of South Chesterfield, VA; eight grandchildren, Amyah, Abraham, Leah, Ayden, Marissa, Leonard, Jr., Cora and Lyric. He also leaves to cherish his memory a host of nieces, nephews, cousins, great-nieces & nephews and friends. Devoted friends include Harriette Hudson, Debra Smith, Tashina Anderson, Calah Smith, Nannie Barnes, Diedra Davis, and Marco Curtis (Kristin). James Henry Williams will definitely be missed by so many for his kindred spirit has touched many lives, known and unknown. Viewing will be held from 10:00 a.m. to 12:00 p.m at the chapel of Lee Funeral Home, 6633 Old Alexandria Ferry Road, Clinton, MD and services will begin at 12:00 p.m. on Saturday, November 6, 2021. Rev. Belinda W. Cosby, eulogist. Please follow the CDC and State of Maryland guidelines. Live Stream Services https://youtu.be/UADKnjryQGY

The family of James Henry Williams created this Life Tributes page to make it easy to share your memories.