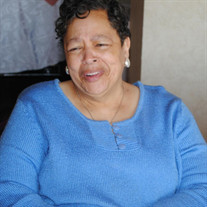 Janet D. Miller (Jan), age 78, of Fort Washington, MD passed away peacefully on Friday, March 26, 2021 at Medstar Southern Maryland Hospital. Janet was born on April 8, 1942 in Washington, DC to Albert S. and Amanda A. Richardson. Janet was raised and educated in Washington, DC and after graduating from Spingarn High School, she continued her education at Central State University in Ohio. In 1962, she married her high school sweetheart Carl Miller (Skip). Through that union they had four children: Carl Jr, Derrick, Charisse (Reese), and Terrence. As a child, Janet joined Randall United Methodist Church. She was very active and was involved in many groups in the church, such as the women’s ministry and youth ministry, as well as teaching Sunday School and being a member of the senior choir and bereavement committee. Janet worked for the National Geographic Association and then decided she wanted to stay home and raise their children. She was a substitute teacher for many years before returning to the work force full time. She was an administrator for the Board of Elections for twenty years before retiring in 1998. Shortly after retiring, she decided to go back to teaching. She taught first grade at a French emergence school until she became ill. Janet loved to cook. She was famous for her fried chicken and always volunteered to help others. She loved to read and watch old tv shows like The Andy Griffith Show, Hazel, and Bewitched. She and Skip also loved to travel. They especially enjoyed long car rides. They have driven cross country several times. Janet was very close to her children and grandchildren who called her “Grammy”. She was quiet, but had no problem speaking her mind and didn’t care who was listening. She would hardly ever sugar coat things. She would tell people she gave birth to four children but claimed at least twelve. She would treat all her kids’ friends as if they were her own. Janet leaves to cherish her memory two sons: Carl A. (Lisa) Miller, Jr. and Derrick (Sarah) Miller; one daughter: Charisse (Phillip) Marsh; six grandchildren: Carl (Kelsie), Ryan, Dawn, Cheyenne, Lenae and Xavier; two great grandchildren: Daniel and Mila; one brother-in-law: Larry Miller, Sr.; one niece: Yolanda Graves; one nephew: Larry Miller, Jr.; and adopted daughter Dona’, Best and longest friend for 75 years Sylvia Ann Brooks, and a host of family and close friends. Janet was preceded in death by her parents, her husband Carl, and her youngest son Terrence Miller. https://www.youtube.com/watch?v=0uQCorvodNk

The family of Janet D. Miller created this Life Tributes page to make it easy to share your memories.

Send flowers to the Miller family.