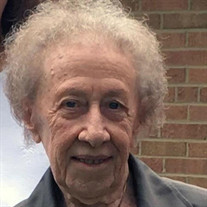 Elva Jean Wilson nee Judy, age 93, passed away on March 21, 2021, at her home in Clinton, MD. Jean was born on July 22, 1927, in Upper Tract, WV, the daughter of the late Jasper H. Judy and Molly Ruddle Lambert Judy. Jean attended Franklin High School in Franklin, WV. After graduation in 1948, Jean moved to Washington, DC, and attended college. She began working in 1950 at the Naylor Road School, a coeducational private school in Washington, DC, that originated as a small nursery school and grew into a complete lower and middle school. During her tenor at the school, Jean held many positions and taught children ages 3 through Grade 8. After 56 years, she retired from the school as Head Administrator in 2006. In 1952, Jean married Kenneth Wilson from Philippi, WV. They lived in Washington, DC, until they moved to Clinton, MD, in 1962. Jean was a member of the American Legion Auxiliary, Post #257 in Clinton, MD. She enjoyed traveling and indoor and outdoor gardening. In addition to her parents, Jean is preceded in death by her husband of 64 years, Kenneth, and her two half-sisters, Treva Lambert Wermuth and Pauline Lambert Kile. She is survived by several nieces and nephews. A service will be held April 8 at 11:15 am at the Cheltenham Veterans Cemetery Chapel in Upper Marlboro, MD. In lieu of flowers, memorial donations may be made in Jean Wilson’s name to the Children & Youth Fund of the American Legion Post #257, P.O. Box 44, Clinton, MD. 20735

The family of Jean Wilson created this Life Tributes page to make it easy to share your memories.

Send flowers to the Wilson family.