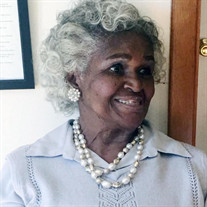 Joan Marie Muse of Temple Hills, MD, passed peacefully away on December 14th 2020 at the age of 89. Born in Newport Rhode Island, Joan was one of 3 children born to Louis and Maude Wigginton. Joan graduated from Rogers High School in Newport, RI where she was described by her classmates as sweet, loveable and ambitious. She met Mintry and they were married April 12th 1954 and remained married until the passing of her beloved husband on October 1, 2016. Through the years Joan loved taking classes and learning new skills. She excelled in everything she attempted. She was prolific with ceramic designs, cake design, and interior design. Joan loved plants and flowers, so the house was always filled with greenery. As soon as the weather turned warm, she faithfully carted her plants outside to get the benefits of the sun. Joan was also very accomplished in sewing. Joan spent many years as a babysitter; she started in the late 60’s and continued until her youngest grandson went to middle school. Many of the children kept in touch and visited her as adults. Joan also babysat all of her grandchildren. They have stories of grandma sending them to Vacation Bible School every summer; making sure they got swimming lessons; and, any other lessons she deemed necessary. Joan always kept her nails and hair on point; so she was truly blessed to have her daughter Diane dressing her hair every Friday so it was fresh for church on Sunday. Joan was a longstanding member of Ebenezer AME Church, where she was a member of the Jewels. She almost always went to the early service and always sat in the same seat. As her health began declining, Joan resided at Henson Creek assisted living where she received great care. Her caregivers have many interesting stories about Joan since even there she kept everyone on their toes and laughing with her. Joan Marie Muse was the beloved wife of the late Mintry Robert Muse who lovingly referred to her as “Joany Bony”. They supported and loved each other for 62 event filled years. Joan was the devoted mother to the late Darryl Lawrence Muse, Claudia Maureen Wilson (Gary) and Diane Annette Muse-Poindexter (William). Joan was preceded in death by her brother Lawrence Jenkins and sister Delores Reed. She was loving grandmother to Aaron Wilson, Andrew Wilson (Alpha), Alysha Theosmy (Edwin), Marcus Muse (Gianna), great-grandmother to Lennox Wilson, Quentin Theosmy, and Emelia Wilson. Joan leaves sister-in law Geneva Feemster(Everett) and many family members and great friends. Joan left an impression on everyone she met and will truly be missed. https://virtua.zoom.us/j/97804612363?pwd=SVZReDRmZmpkZHBXQTR6amdheHRFUT09 Meeting ID: 978 0461 2363 Passcode: joan

Joan Marie Muse of Temple Hills, MD, passed peacefully away on December 14th 2020 at the age of 89. Born in Newport Rhode Island, Joan was one of 3 children born to Louis and Maude Wigginton. Joan graduated from Rogers High School in Newport,... View Obituary & Service Information

The family of Joan Marie Muse created this Life Tributes page to make it easy to share your memories.

Send flowers to the Muse family.