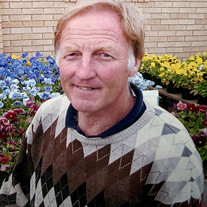 Johannes (“Jos”) Gerardus Nicolaas Roozen, a resident and businessman of Fort Washington, MD for 43 years, passed away February 8, 2018. Born March 21, 1947, in Egmond, Holland, to Hendricus and Elizabeth Roozen, he grew up in Northern Holland and immigrated to the United States in 1971. He owned and ran Roozen Nursery with his brother, Eric Roozen, in Fort Washington since 1975, doing what he loved most, working with people and horticulture. He hosted a local radio gardening program, Garden Sense, with Rick Fowler, which aired across the mid-Atlantic region. He is survived by his wife of 43 years, Brenda F. (Osborne) Roozen; three sons, Eric J. Roozen of Washington, D.C. (and his wife), Robert P. Roozen of Fort Washington, MD, and Nicholas S. Roozen of Alexandria, VA (and his wife); his daughter, Kimberly D. Ramos (and her husband) of Haymarket, VA; his five grandchildren, Tyler Ramos, Cameron Ramos, Peyton Ramos, Milana Roozen, and Evaliese Roozen; his two brothers, Nicolaas G. Roozen of Egmond, Holland and Eric B. Roozen of Fort Washington, MD; and his sister, Karin D. Papas of East Hampton, MA. He was preceded in death by his parents and brother, Leo Roozen.

The family of Johannes "Jos" Roozen created this Life Tributes page to make it easy to share your memories.

Send flowers to the Roozen family.