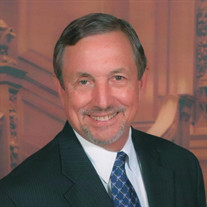 John Michael “Mike” Carrier, age 73, of Dunkirk, MD passed away suddenly on July 31, 2021 while visiting his beach home in North Myrtle Beach, SC. He was preceded in death by his parents, David F. and Stella Carrier, and his brother, Richard Carrier. He is survived by his wife, Theresa “Terry” Carrier; three sons, Jason (Olivia) of Marshfield, Vermont, Jeffrey of Dunkirk, MD and Brian Palmer of Henderson, NV; one daughter, Megan (Jeremy) Lawrence of Morgantown, WV; four grandchildren: Penelope and Julien Carrier and Isabel and Owen Lawrence; four brothers, David (Marilyn) of Plano, Texas, Steven (Debbie) of LaPlata, MD, Joseph (Barb) of Johnstown, PA, and Stanley (Linda) of Johnstown, PA; one sister, Mary (Dave) Marsinko of Johnstown, PA; and loving in-laws, nieces, nephews, and a host of long-time friends. Mike joined the United States Air Force in 1967 and retired in 1990 after 23 years of service to his country attaining the rank of Captain. He was a licensed Air Traffic Controller for several years, and he ended his military career handling Foreign Military Sales. After his retirement, Mike worked for several IT companies in a business development role; Mike was well-known for the phrase, "BD Never Sleeps!” Mike was also well-known for his many Dad jokes, and his ability to make people laugh; he could work any room and bring everyone to laughter. Mike was a dedicated and devoted husband, father, and grandfather, and he was loved by anyone who knew him. Mike earned an A.A.S. from Mississippi Gulf Coast College, and A.S. in Air Traffic Control from Community College of the Air Force, a B.S. in Aviation Science from Troy State University, and a M.A. in Administration from Central Michigan University. Mike was an avid golfer enjoying his new-found golf family at the Retreat at Barefoot in North Myrtle Beach; golf was to have been his third career after retirement. He was an avid Pittsburgh Steelers fan and he rarely missed watching any game. Mike was a dedicated runner having run his last 5K race July 4, 2021; during his running career, he ran 3 ultramarathons, multiple marathons, and several 5K and 10Ks. Mike was also an animal lover, especially his Pekingese fur babies. The family will receive friends at Lee Funeral Home Calvert, 8200 Jennifer Lane, Owings, MD 20736 on Wednesday, August 11, 2021 from 10:00 AM – 12:00 PM where a Funeral Service will be held at 12:00 PM in the Funeral Home Chapel. Interment will follow at Southern Memorial Gardens Cemetery, 10155 Ward Road, Dunkirk, MD 20754. As per family request please wear a mask during visitation and Funeral Service.

John Michael &#8220;Mike&#8221; Carrier, age 73, of Dunkirk, MD passed away suddenly on July 31, 2021 while visiting his beach home in North Myrtle Beach, SC. He was preceded in death by his parents, David F. and Stella Carrier, and his brother,... View Obituary & Service Information

The family of John Michael "Mike" Carrier created this Life Tributes page to make it easy to share your memories.

Send flowers to the Carrier family.