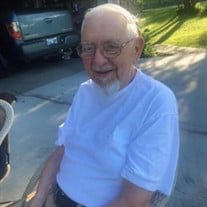 John Joseph Jordan, 92 years of age, passed away on Sunday, September 19th, 2021 at Medstar Washington Hospital Center. Joe was born June 7th, 1929 in Arrowwood, Alberta, Canada to the late Frank and Ruth (Crist) Jordan. He was the oldest of three. Joe attended Anacostia High School in Washington D.C., and following graduation entered the workforce. In 1948, Joe started working for C&P Telephone Company. In 1951, he was drafted into the Army to serve in Signals Intelligence until he served his tour of 2 years and returned to work in 1953. He worked for the phone company in the roles of lineman, installer, and he finished his career as a Central Office Technician (Testman) until his retirement in 1986. He was deeply respected for his character and work ethic in the company. Joe met and married the late Ada Ellen Burney, who also worked for C&P Telephone Company, on July 2nd, 1954, and went on to have 3 children. After Ada Ellen’s passing, Joe married the late Rose (Corso) Cornell, who also worked for C&P Telephone Company, on April 20th, 1993. With this marriage, Joe gained 7 children and numerous grandchildren. Joe was involved in the Masonic Order of Freemasonry, joining the Camp Springs Lodge #227. He travelled extensively throughout the region, visiting various lodges from the Shenandoah Valley to Philadelphia, supporting friends and other brothers. He was Worshipful Master of Camp Springs Lodge in 1990. He also served many years as Associate Bethel Guardian of Job’s Daughters Bethel #41. Joe was involved at Our Saviour’s Lutheran Church, where he and Rose ran the food pantry. They were involved in Via de Cristo. Joe was involved with Bible study and loved to study his Bible. “Strangers are just friends I haven’t met yet,” -Will Rogers: Joe exemplified this quote all throughout his life. He loved to talk with all of his friends and family, and his conversations were never brief. He was a devoted husband, father, grandfather (granddaddy/ papaw/ grandpa/ pop), uncle, and friend. He was always thinking of others first, whether it was to call to just talk about something, to clip something in the newspaper that reminded him of someone he loved, or to travel to attend an event in support of a family member. Joe is survived by his brother James (Barbara) Jordan; his children John Jordan, Jim (Chris) Jordan, Jennafer (Kevin) Newbury, David (Anna) Cornell, Ellen (Jim) Carpenter, Nancy (Ray) Crampton, Jantana Cornell, Don (Marsa) Cornell, Patricia (Tim) Badger; his grandkids Joelle (Zachary) Johnson, Jadalynn (Joshua) Orr, Joel Jordan, Kara Jordan, John William (Kori) Jordan, Ian (Kristin) Newbury, Seth Newbury, Felicity (Victor) Gancedo; his great grandson Jeremiah Johnson, and 3 more generations of Cornell grandchildren, and dear family he chose, Teresa Ferrante and Russell Smith. He is also predeceased by Nancy (Jordan) Will, Sherian Cornell, and James (Jay) Cornell III.

John Joseph Jordan, 92 years of age, passed away on Sunday, September 19th, 2021 at Medstar Washington Hospital Center. Joe was born June 7th, 1929 in Arrowwood, Alberta, Canada to the late Frank and Ruth (Crist) Jordan. He was the oldest of... View Obituary & Service Information

The family of John Joseph Jordan created this Life Tributes page to make it easy to share your memories.

Send flowers to the Jordan family.