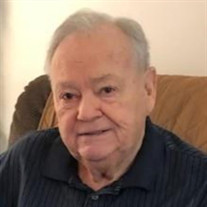 John Alfred Sands, Sr. entered into the arms of Jesus on Tuesday, August 31, 2021. His life may have ended, but his love lives on. Born on May 11, 1934, to Elsie Maud and Arthur Sands. John was the 2nd child born to Arthur and Elsie. He was born in the house next to his Aunt Mabel Kuhn’s home on Welday Avenue in Steubenville, Ohio. Growing up he helped around their home in Buena Vista clearing the land by hand for a large garden and tended to the ducks, pigeons, rabbits, and chickens. John attended elementary school in a one-room schoolhouse in Buena Vista in Steubenville, Ohio. John and his brother, Eugene, would walk 5-6 miles on Halloween to their Aunt Mabel’s house because she gave out the best candy. As a teen he lived for a short period of time with his Aunt Mabel where he developed an appreciation for music on her piano during World War II. It caught on in his life and it’s where he got his love of music. John graduated from Steubenville “Big Red” High School in Steubenville, Ohio, in 1952. With John’s love of music, he was in the Steubenville “Big Red” High School Marching Band. He was the first chair out of 8 in the Big Red Orchestra. In the Naval Reserve he played in the Tom Carey Dance Band. He was in the Mingo Junction Volunteer Fire Department Baritone Bugler in the Drum and Bugle Corps. He also played the slide trombone. John worked for the Ohio State Highway Department driving a truck. He was employed by the Pennsylvania Railroad track repair crew. He worked for the Weirton Steel, Wheeling Steel, and Follansbee Steel Works. His proudest moment was finding his wife, the love of his life for 67 ½ years, Barbara Ann Ellis. They were married on September 16, 1953. For 8 years, from May 10, 1951, to May 10, 1959, he was in the United States Naval Reserve where he traveled to Havana, Cuba, where he witnessed Castro’s soldiers strafing President Battista’s hotel. He was a Petty Officer, 3rd Class Radarman in the naval reserves. He received an honorable discharge. John was an Assistant Superintendent at the Steubenville, Ohio, Wastewater Treatment Plant. In 1970 he moved his family to Forestville, Maryland, where he became the Chief Plant Operator for the Washington Suburban Sanitary Commission, Western Branch Wastewater Treatment Plan where he worked for 34 years, retiring in 1991. John was ordained as a deacon through the American Baptist Convention in the First Baptist Church of Steubenville, Ohio. He was ordained as a deacon through the Southern Baptist Convention in Forestville Baptist Church in Forestville, Maryland. The colors blue and purple were his favorite colors. His favorite scripture was the 23rd Psalm. His favorite songs were “It Is Well”, “Amazing Grace”, “Since Jesus Came Into My Heart”, “The King Is Coming”, “The Old Rugged Cross”, and “Waiting On The Robert E. Lee”. John loved music and he led music as a director of music in four Baptist Churches (Forestville, Suitland, Kettering, and Calvary). He also taught music classes. He would think about music 24 hours a day. He wrote about 10 songs on paper so they could be played on the piano with its accompaniments. His nieces and nephews were in The Family Circle group, and they recorded a few of his songs on their CDs. He sang baritone in the Assurance Men Gospel Quart for 8 years and travel to various states to sing and present the gospel. For many years John and Barbara would go to Florida in the winter and to Maryland in the summer. While they were in Florida, they were members of the McGregor Sanctuary Choir and a part of the McGregor Senior Touring Choir. In April 2019 they sold their home in Fort Myers, Florida, and their home in Maryland, and moved in with their daughter and son-in-law in Maryland and were closer to family in the area. John was preceded in death by his father, Arthur Sands of Sheffield, England; his mother, Elsie Maud (Pratley) Sands of Steubenville, Ohio; his brother, Arthur Eugene Sands of Pennsylvania; and his sister, Sally Jane (Sands) Englert of Bonita Springs, Florida. He was also preceded in death by his loving wife of 67 ½ years, Barbara Ann (Ellis) Sands. He is survived by his four children: John (Kimverly) Sands, Jr. of Owings, Maryland; Vicki (Danny) Sullivan of Cheltenham, Maryland; Karen Sands of Lothian, Maryland; and Patricia (Frank) Quattrone of Castle Rock, Colorado; eight grandchildren Michelle Sands-Kortie; Jamie (Travis) Ferrer; Tiffany (Andrew Irving) Sands; Brandi Quattrone; Frank (Anna) Quattrone; Ashley (Anthony) Trubiano; Joshua (Emily) Sullivan; and Samantha (John Pearson) Sands; and 14 great-grandchildren Cody Kortie; Lexia Kortie; Elsia Sands; Colton Ferrer; Tyler Stevens; Lennon Irving; Danica Quattrone; Aria Quattrone; Frank Quattrone; Aspen Quattrone; Toni Mae Trubiano; Luca James Trubiano; Lily Heppe; Mason Heppe; and many nieces and nephews. The family will receive friends at Lee Funeral Home Calvert, 8200 Jennifer Lane, Owings, MD 20736 on Wednesday, September 8, 2021, from 6:00pm – 8:00pm and Thursday, September 9, 2021 from 10:00am – 11:00am, where a Funeral Service will be held in the Funeral Home Chapel at 11:00am. Pastor Robert Wagner will officiate the services. Interment will follow at Lakemont Memorial Gardens Cemetery, 900 West Central Avenue, Davidsonville, MD 21035.

John Alfred Sands, Sr. entered into the arms of Jesus on Tuesday, August 31, 2021. His life may have ended, but his love lives on. Born on May 11, 1934, to Elsie Maud and Arthur Sands. John was the 2nd child born to Arthur and Elsie. He... View Obituary & Service Information

The family of John Alfred Sands, Sr. created this Life Tributes page to make it easy to share your memories.

John Alfred Sands, Sr. entered into the arms of Jesus on Tuesday,...