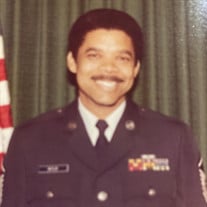 Chief MSgt (Ret.) Joseph Lloyd Butler, 81, of Suitland, MD, passed away July 24, 2020 at home. He was born March 22, 1939 in St. Inigoes, MD, the 4th son of the late Lucas and Geneva Butler. He was also preceded in death by his siblings Earl Butler and Geraldine “Nobby” Rothwell; first wife Samnieng Butler; and infant twin daughters Mary Laddawan Butler and Mary Monrudee Butler. He is survived by siblings Lawrence “Jr” Butler, Patrick Butler and sister-in-law Barbara Butler, Shirley Wade and brother-in-law William Wade, and Arlene “Fatgirl” Butler; second wife Sommai Butler; children Chitlada Hill and son-in-law Michael Hill, Babette Butler, Jerard Butler and daughter-in-law Kim Butler, Alex Butler; six grandchildren Tamara Zapanta, Michael Hill, II, Brandyn Butler, Brianna Butler, Justin Butler, and Mya Butler; and seven great-grandchildren Kiana Zapanta, Jaela Zapanta, Leanni Zapanta, Isaiah Zapanta, Ella Hill, Michael “Tripp” Hill, III, and Kross Self; and a number of nieces and nephews. Lloyd, as he was known to family when growing up on his parents’ farm, or Joe, as he was known to others; was a Vietnam War veteran, having stationed at various posts, most notably in Thailand, Hickam A.F.B. in Honolulu, HI, and the Pentagon in Washington DC.; worked as an Administrative Manager. After retiring from the military, he worked at the Export Import Bank in Washington D.C. until he retired for the second time to relax and enjoy his life. He started his education at St. Peter Claver, St. Inigoes, MD and graduated from Cardinal Gibbons High School, St. Inigoes, MD. In pursuit of furthering his education, he attended Georgetown University in Washington DC and University of Maryland, College Park, MD which culminated in a Bachelor’s Degree in Business Administration. He was born left handed and always enjoyed telling others he saw that were also left handed “Left handed people use the right hand” and his face would widen with a smile. People of all ages were drawn to his outgoing warm personality. For someone who grew up on a farm, he would not eat chicken or eggs. The story goes that he had a pet chicken. Then one day his mother prepared his chicken for dinner. This stayed with him throughout his life. Always asking if there were eggs in potato salad at cookouts, but loved carrot cake even though he knew there were eggs in making the cake. He was so proud of his military service that he was a card carrying life member of DAV (Disabled American Veterans). In lieu of flowers, please make donations to DAV (Disabled American Veterans) in Lloyd's honor.

Chief MSgt (Ret.) Joseph Lloyd Butler, 81, of Suitland, MD, passed away July 24, 2020 at home. He was born March 22, 1939 in St. Inigoes, MD, the 4th son of the late Lucas and Geneva Butler. He was also preceded in death by his siblings Earl... View Obituary & Service Information

The family of Joseph Lloyd Butler created this Life Tributes page to make it easy to share your memories.

Send flowers to the Butler family.