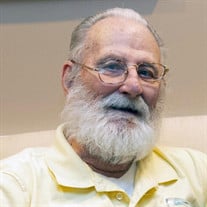 Joseph M. Carhart, of Cheltenham Maryland, passed away on July 28, 2020 at the age of 92. He was known as Mac to family and friends and as Joe to his colleagues. Mac was beset with a number of health issues as he aged, but he was blessed with a peaceful death at home, in his sleep. He was raised by his mother, Louise (Graves), in Washington DC with his three siblings and spent many a summer with family in Leonardtown, MD. It may have been those summers on the farm that instilled a life-long hobby of vegetable gardening. Tomatoes were the main crop, with as many as 200 plants thriving each summer, although he rotated his backyard crops and experimented with different plants and varieties. He spent the winter months planning his garden and continued planting into his eighties. Mac enlisted the United States Air Force the moment he was old enough in 1946 and served for 7 years. His duties were as a Radar Repairman, although the stories he told his kids focused more on the football he played and his first Christmas away from home. He married Marlene Chianese in 1966 after a whirl-wind, long-distance courtship. Knowing from the start of their marriage that adoption was their route to parenthood, Mac enlisted the help of the Apostle St. Jude. (Patron saint of desperate cases and lost causes.) Christina Louise was born in 1968, followed by Dominic Jude in 1969. In thanksgiving, Mac promised to donate half of any lottery ticket winnings to St. Jude charities, a promise he kept until his death. The bulk of his professional career was spent at Middle Atlantic Conference, which published tariff rates for the freight industry. His job called for precision and proofreading, skills which served as both a help and an annoyance to his children when he read their school reports. His Catholic faith was important to Mac. He and his family were members of Most Holy Rosary Catholic Church in Upper Marlboro, Maryland since 1972. He prayed for all those who were distanced from their faith and was conscientious about requesting that Masses be said for friends and family members on important days as well as during any health crisis. He appreciated Masses being said for his intentions on his birthday, perhaps only slightly more than he appreciated treats and homemade snickerdoodles. He leaves behind his wife of fifty-four years, Marlene (Chianese), two children Dominic (Crystal Chambers), Christina O’Brien (Michael), and one grandchild, Christopher O’Brien. He was preceded in death by his brother Charles and is survived by his two sisters Mary Branson (Herman) and Helen Cater, as well as many nieces and nephews. In lieu of flowers, Mac would have appreciated your prayers for grace and comfort for his family, as well as any contribution you would like to make to St. Jude Charities. One of his favorites was St. Jude’s Children’s Hospital (https://fundraising.stjude.org/site/TR/GiftFunds/GiftFunds?px=6699631&pg=personal&fr_id=39300). A Mass of Christian Burial will be held on Wednesday, August 12 at 11:00 am at Most Holy Rosary Catholic Church in Upper Marlboro, MD. Services will be small and simple, both because Mac was the kind of person who didn’t want a fuss made over him and because of COVID-19. The church requires that those who share in the Mass will wear masks and socially distance as well as do their best to avoid exposure in the days before to help limit risk. Many friends and family will be unable to gather in person and the family truly understands those limitations. The Mass will be live-streamed on the internet through the Parish website live Mass link (https://www.mostholyrosarychurch.org) and Facebook page (https://www.facebook.com/mostholyrosaryparish/videos). There will be no repast following the service, but the family looks forward to the day when all can safely gather again.

Joseph M. Carhart, of Cheltenham Maryland, passed away on July 28, 2020 at the age of 92. He was known as Mac to family and friends and as Joe to his colleagues. Mac was beset with a number of health issues as he aged, but he was blessed with... View Obituary & Service Information

The family of Joseph "Mac" Carhart created this Life Tributes page to make it easy to share your memories.

Joseph M. Carhart, of Cheltenham Maryland, passed away on July...