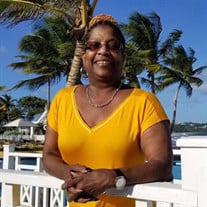 It is with profound sadness that the family of Juanita Jane Cunningham announce her peaceful passing on October 8, 2021, due to COVID-19. Juanita was born in Washington, DC on February 18, 1951, to the parents of Elwood and Fannie Gilreath. She graduated from McKinley Technical High School in Washington, DC in 1969. She was joined in holy matrimony to William Cunningham in 1971, and of that union two sons, Michael William and Brian Lamont were born. Juanita entered the workforce as a Sales Associate for Lansburgh Department Store. She later became a federal employee and diligently worked in a variety of agencies including the U.S. Marshals Service, Office of Personnel Management, Federal Energy Regulatory Commission, and the Government Accountability Office. After her first retirement from the Federal Government in 1995, Juanita worked as an HR Consultant. She returned to the Federal workforce in 2008 until her final retirement in 2017. Juanita was a “fashionista” and enjoyed being a beauty, hair and makeup consultant. Juanita fulfilled a lifelong goal and attended New Creations Academy School of Cosmetology to receive her license in 1996. She also served as a cosmetology instructor and state licensing exam proctor. She was a member of the Unique Ladies social club, the National Organization of Black Law Enforcement Executives and Blacks in Government. Juanita enjoyed action movies, music and traveling - which would often include a trip to a casino. She was also a fan of the Washington Football Team, even when they were known by their former name. She was predeceased by her parents, Elwood and Fannie Gilreath and her son Michael. Juanita had a big heart and was willing to lend a helping hand to family, friends, and at times, even strangers. Juanita will be dearly missed by her son, Brian, daughter-in-love Erin, Grandsons Michael, Quinton and Kenyon, Granddaughter Kamiyah, and a host of cousins, aunts, uncles and friends. The family wishes to send a special thank you to the staff at the INOVA Hospital at Fair Oaks for their care and compassion. An outdoor celebration of life service will be held on Saturday, November 6, 2021, at 1:00 pm at the Field Pavilion of the Fraternal Order of Police Lodge 89, 2905 Old Largo Road, Upper Marlboro, MD 20772. Visitation with the family from noon to 1:00 pm.

It is with profound sadness that the family of Juanita Jane Cunningham announce her peaceful passing on October 8, 2021, due to COVID-19. Juanita was born in Washington, DC on February 18, 1951, to the parents of Elwood and Fannie Gilreath.... View Obituary & Service Information

The family of Juanita Jane Cunningham created this Life Tributes page to make it easy to share your memories.

It is with profound sadness that the family of Juanita Jane Cunningham...

Send flowers to the Cunningham family.